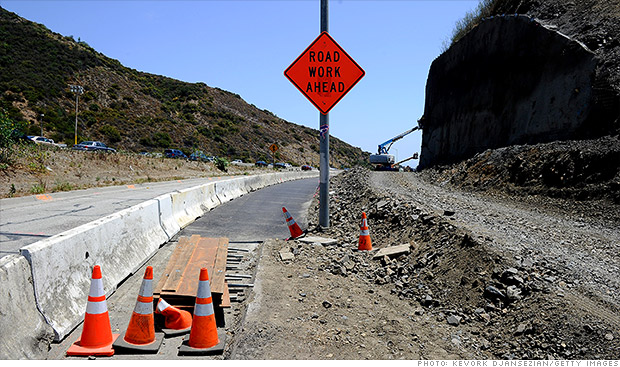 Washington (CNN) – President Barack Obama turns his attention this week to the state of America’s roads and bridges as the clock ticks toward a funding gap on infrastructure projects nationwide.

The White House said Sunday that Obama and his deputies would spent multiple days this week calling on Congress to pass a bill to improve the country’s crumbling infrastructure before existing funding runs out at the end of this summer.

The highlight will come Wednesday when Obama delivers remarks in front of the Tappan Zee Bridge in New York’s lower Hudson Valley. The more-than-16,000 foot cantilever bridge is in a state of disrepair after years of overuse; a replacement Hudson River span is set to open in 2018.

The push comes as the federal Highway Trust Fund is rapidly dwindling, setting up a so-called “transportation cliff” toward the end of August. Fueled by gasoline taxes, the fund hasn’t been able to keep up with spending demands as Americans spend less on fuel.

Meanwhile, America’s highways and bridges - and other critical parts of the nation's transportation infrastructure such as railways - need serious upgrades and repairs. The American Society of Civil Engineers gives U.S. infrastructure a D+ in terms of condition and performance.

Obama has laid out a plan that would supplement the Highway Trust Fund with $150 billion for new infrastructure investments, which the White House says would both repair dangerous roads and bridges and put more Americans back to work.

“President Obama has laid out a vision for a 21st century transportation infrastructure that would not only avert a crisis in the short-term but would support millions of jobs and help position our economy for lasting growth,” White House spokesman Matt Lehrich said.