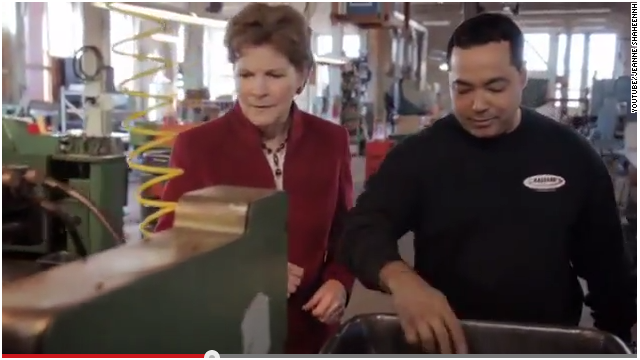 In the 30-second spot, Adria Bagshaw, the vice president of a family owned small business in the Granite State, says that "we're a small family business and it's tough to compete. What really impresses me about Jeanne Shaheen is if we bring a problem to her she cares and she's gonna listen. In the Senate, Jeanne Shaheen's helping small businesses export, get access to credit, and train the high-skill workers we need."

Shaheen's campaign said the commercial will run for at least a week on WMUR, the main broadcast TV station in New Hampshire, as well as on cable throughout the Granite State.

As with Shaheen's first TV ad, which hit airwaves last week, the new spot stays positive and doesn't mention Brown or any of her other GOP challengers.

Scott's launched his first commercial just four days after formally announcing his campaign for Senate in New Hampshire. The former senator from neighboring Massachusetts sold his home in the Bay State late last year and moved his residency north to New Hampshire, where he owed a vacation home and where he spent much of his childhood.

His first ad was also positive, highlighting his listening tour throughout New Hampshire.

"Scott Brown has almost 300,000 miles on this truck," said the narrator in the spot. "Over the last few weeks it's taken him all across New Hampshire, listening, learning – and what he's learned is pretty simple: People want an America that leads the world again, a health care system that works for New Hampshire and more good jobs."

One day before Brown's retirement from the Army National Guard on Tuesday, his campaign released a new video that highlights the support for the candidate from a number of New Hampshire veterans.

To date, outside groups have been the biggest spenders in the Senate battle in New Hampshire.

And the Ending Spending Action Fund, a pro-Republican outside group, has also run ads in support of Brown and against Shaheen.

The most recent public opinion survey in the race - a WMUR/University of New Hampshire Granite State Poll conducted last month - indicated Shaheen holding a 45%-39% advantage over Brown among likely voters in a potential general election matchup. Shaheen's six percentage point advantage was down from a 10 point lead in January. Fourteen percent were undecided in the survey.