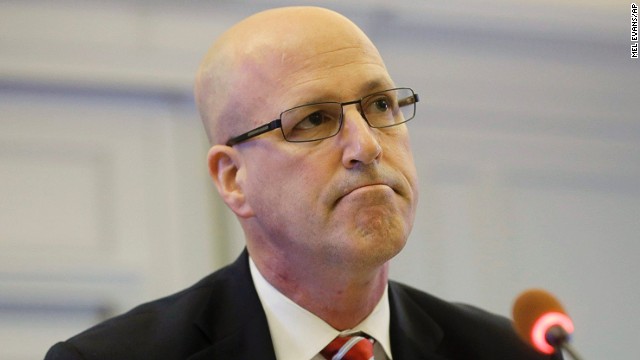 Christie spokesman: I was not involved in ‘idiotic episode’

(CNN) – New Jersey Gov. Chris Christie's chief spokesman said Tuesday that he had no part in controversial lane closures to the George Washington Bridge last year, the core of a political scandal that has upended the Republican's administration.

"I had no knowledge or involvement in the planning or execution of this strange, unnecessary and idiotic episode," Michael Drewniak said in his subpoenaed testimony before a legislative committee investigating the controversy that has also clouded Christie's potential presidential run.

He also denied having any knowing role in any "actual or perceived cover-up."

Separately, Christie said Drewniak's appearance before the committee and a similar session involving a former aide last week has broken no new ground, despite multiple hours of testimony.

"Absolutely nothing new has come out of this," Christie said on his monthly "Ask the Governor" program on New Jersey 101.5.

He said the testimony has recovered issues already included in an internal review of the scandal conducted by lawyers hired by his office and made public in March. That review cleared Christie of any wrongdoing, but critics said the effort was not thorough.

In his testimony, Drewniak said emails and texts between two former Christie appointees – Bridget Kelly and David Wildstein – were "shocking and disorienting."

The exchanges made public in January offered details and context to the saga, elevating it from a state issue to one that generated national headlines.

Drewniak had considered Wildstein a friend but said the emails represented a "deep betrayal" of that friendship and he now realizes how "badly, regrettably, even naively, I misplaced that trust."

The press secretary has kept a low profile since the scandal broke wide open.

An area of interest for investigators are exchanges Drewniak had with Wildstein, a former appointee at the Port Authority of New York and New Jersey, last December shortly before Wildstein left his position.

The emails in question show the two, over a period of weeks, coordinated a response to media inquiries to the gridlock caused by the closures. The Port Authority oversees bridge operations.

Drewniak said he at first brushed off reporters about the lane closures, saying traffic problems were a "bottom of the barrel" issue for the governor's office. He started paying more attention to the story after the Wall Street Journal began looking into it.

Officials initially blamed the road mess on a traffic study. But investigators want to know whether Wildstein, and possibly others, abused their authority by closing down the lanes to punish the mayor of Fort Lee, Democrat Mark Sokolich, who did not endorse Christie for reelection.

Asked why he didn't dig further into the allegations that the lane closures were part of a political vendetta, Drewniak said he had a hard time fathoming such speculation because he considered the mayor irrelevant.

"That was the most insane thing to even contemplate, shutting down lanes to the bridge for a political retaliation against a mayor I'd never even heard of?"

Drewniak recalled a time when someone asked about the mayor, and Drewniak replied: "What's a sokolich?"

Drewniak has not been accused of any wrongdoing. He answered questions Tuesday about the administration's response to the media, but maintained he really was under the impression that it was a traffic study, as the administration said.

Christie has repeatedly denied knowing about the traffic mess until after it occurred.

The U.S. Attorney's office is also investigating the lane closures and has empaneled a grand jury.

Drewniak said on December 4 he had what he called an "uncomfortable" dinner with Wildstein, who took full responsibility for the "traffic study," saying it was his idea and "stuck to it as valid."

At that same dinner, Wildstein presented documents that showed the traffic study and reiterated that Kelly, as well as another Christie associate, former campaign manager Bill Stepien, were also aware of the study at the time of the closures. He did not provide Drewniak with a copy of the documents.

Wildstein also said he told Christie about the traffic study on September 11, during the week of the lane closures. Drewniak was surprised at the statement and said he relayed that information to the governor the following day.

Responding to the claim, Christie said he didn't remember Wildstein's statements about the traffic, according to Drewniak.

Drewniak said Christie said something along the lines of: "He tells me at a September 11th event in some fly-by or drive-by remark about, something about traffic, and I'm supposed to understand what he's talking about?"

In his testimony, Drewniak also gave details about a confrontational meeting that Christie had with his staff on December 13, when he demanded that if anyone knew about the lane closures, they had two hours to come forward.

"The confessionals are open," Christie said, according to Drewniak.

Drewniak said he had never seen the governor in such a "powerful" state. He said it was an "uncharacteristic moment of…very constructive anger."

"Everybody in the room was absolutely riveted because we had never heard him talk to us in that way," Drewniak said. "He want around the table and just said so eloquently that this is no time to screw up."

Drewniak had already alerted the governor that Wildstein claimed Kelly and Stepien, were aware of the lane closures.

Kelly is said to have authored the now-infamous email to Wildstein: "Time for some traffic problems in Fort Lee," weeks before the lane closures occurred.

No one came forward, however, and Christie went on to say in the press conference that the political drama surrounding the issue was "created and manufactured” and further characterized it as "a whole lot of hullabaloo."