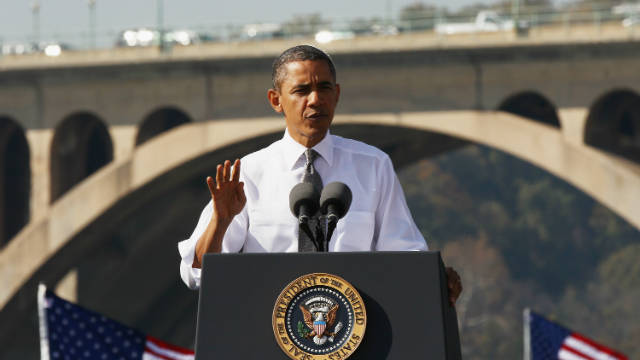 The bill was introduced earlier this week, with some Republican support.

Transportation Secretary Anthony Foxx said the Obama administration is encouraged by the Boxer bill - but officials are concerned it doesn't go far enough.

The push comes as the federal Highway Trust Fund is rapidly dwindling, setting up a so-called "transportation cliff" toward the end of August. Fueled by gasoline taxes, the fund hasn't been able to keep up with spending demands as Americans spend less on fuel.

Returning to the White House's theme of a "year of action," Obama also will announce an executive action to streamline infrastructure permitting at the federal level.

The Tappan Zee Bridge in New York's lower Hudson Valley, a more-than-16,000 foot cantilever structure, is in a state of disrepair after years of overuse; a replacement Hudson River span is set to open in 2018.

Meanwhile, America's highways and bridges - and other critical parts of the nation's transportation infrastructure such as railways - need serious upgrades and repairs. The American Society of Civil Engineers gives U.S. infrastructure a D+ in terms of condition and performance.

Obama has laid out a plan that would supplement the Highway Trust Fund with $150 billion for new infrastructure investments, which the White House says would both repair dangerous roads and bridges and put more Americans back to work.

CNN's Kevin Liptak and Dana Davidsen contributed to this report.