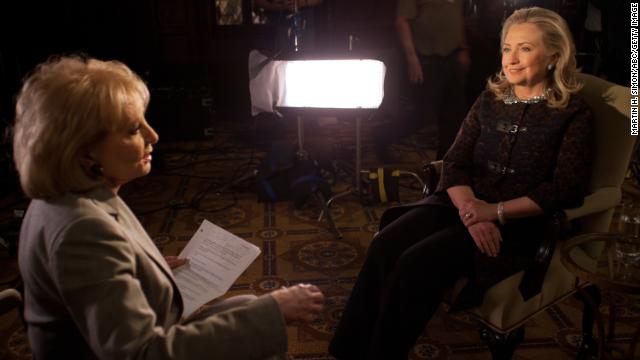 Hillary Clinton: ‘I am running…around the park’

(CNN) – Hillary Clinton continues to play coy with whether or not she is running for president.

At Barbara Walters' final taping of ABC's “The View,” the former secretary of state and prohibitive favorite for the Democratic presidential nomination in 2016 was a surprise guest.

During her sit-down with Clinton, Walters asked Clinton whether she is running for president.

Continuing a tradition of joking about the 2016 election, Clinton said, "I am running - around the park."

Since leaving the State Department in 2013, Clinton has crisscrossed the country delivering paid speeches and appearing at high profile events. She acknowledged in April that she was "thinking" about running for president and has seen a number of former staffers begin to organize groups at the prospect of her candidacy.

Walters' final episode of “The View” was taped on Thursday and featured a cadre of high profile female journalists and newsmakers. The episode will air on Friday.

Walters is retiring from television journalism on Friday after a storied and groundbreaking five-decade career in the business. An icon for women in the profession and someone known for landing high profile interviews, Walters told CNN that she "knew it was time" for her to retire.

"I like all the celebration, that's great. But in my heart, I thought, 'I want to walk away while I'm still doing good work,'" Walters told CNN's Chris Cuomo. "You have to leave sometime, don't you? I want to leave while people like you are saying, 'Why are you going?' I just know it's the time to go."

Clinton offered Walters some advice on how to handle her upcoming influx of free time.

"First of all, take some time off," Clinton said.

Walters quickly replied: "You're in no position to tell me to take some time off."

As the audience laughed, Clinton shrugged. "That's what I've been doing."

"You have a wealth of friends who adore you, spend time with them, take a real vacation. I go out with my dogs. My husband and I take long walks," Clinton continued, joking that Walters should take "a week, at least."

The ladies of "The View" peppered Clinton with questions about her upcoming role as grandmother.

Asked what she would like to be called by her grandchild, Clinton said she hasn't decided yet.

The future grandmother laughed off the 2016 reference, adding there are a lot of options but she's "got to meet this little person" before they make a decision on a name.

CNN's Dan Merica and Ashley Killough contributed to this report.