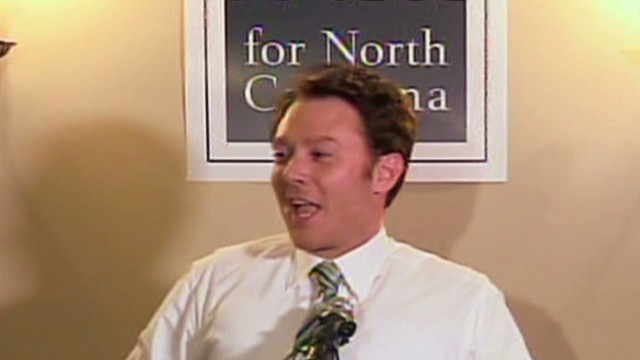 Aiken: People need 'to see me in a different light'

(CNN) - Clay Aiken says his "American Idol" fame is both a blessing and a curse as he runs for Congress in his native North Carolina.

"It's both. You know, you've got to get people to see me in a different light. Getting the opportunity to talk to people about the issues that are affecting them and talk about how I want to help people, gets people to see me in a different light. It's a blessing in the fact that it gets me in the room, but I have to overcome the fact that people see me in one way and not the other," Aiken said Tuesday on NBC's "Today" show.

Aiken is the Democratic nominee in North Carolina's 2nd Congressional District. He'll face off in November in an uphill fight against Republican Renee Elmers. The two-term incumbent representative earlier this year took a swipe at Aiken, saying that his performing career wasn't going well and that he was bored.

Asked about those comments, Aiken said "of course. I'm not naive to the fact that this a challenge that I have to overcome. It's a mountain to climb, but we've had quite a bit of success in the past three months in climbing it and we'll continue to do that the next six."

Aiken's celebrity status gives him instant name recognition in the district, where he grew up, and should allow him to raise a lot of campaign cash. But the second congressional district, located in the central and eastern parts of North Carolina, is GOP country. The two-term Ellmers won 56% of the vote in her 2012 re-election, slightly underperforming the GOP presidential nominee Mitt Romney, who beat President Barack Obama 58%-41% in the district.

But Aiken remains optimistic about his chances.

"This district is about a third independent. And so it has swayed conservatively in the past. But also, more historically, even more further back in the past, it's gone to a Democrat," Aiken said. "People are tired of partisan politics. You've got everyone who votes because people in the media talk about R and D. But people at home, they don't talk about party. They talk about the things that are important to them."

Aiken gained national attention when he came in second to Ruben Studdard in the second season of "American Idol." In 2008 he came out as gay, and he's criticized North Carolina's ban on same-sex marriage. While he isn't highlighting same-sex marriage on the campaign trail, he says he isn't downplaying the issue.

"I don't know that we're necessarily particularly specifically down playing anything. We're up playing the things that are affecting people's lives. The fact that students are coming out of college with average of $29,000 worth of debt. The fact that the unemployment rate is not lowering, is not going down as fast as it could be. Veterans affairs. Education in general. We're talking about the things that are affecting people's lives and that's not necessarily one of them," Aiken added.

Last week results from the May 6 Democratic primary indicated Aiken had beat his main opponent, Keith Crisco, by fewer than 400 votes. A third Democratic candidate trailed further behind. The final results were announced one day after Crisco died suddenly at his home.

Asked about his opponent's death, Aiken said "it's a difficult thing for everyone to have to deal with."