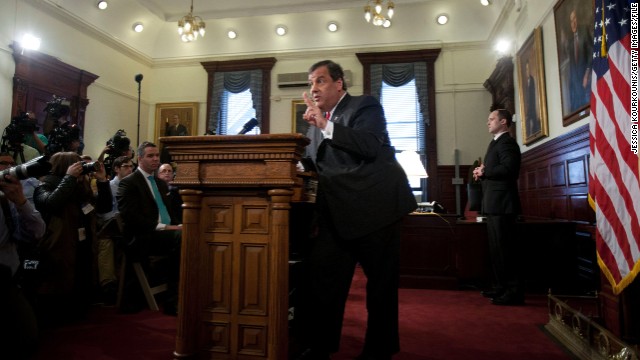 The move is part of the governor's plan to close an unexpected $807 million budget shortfall that his administration was made aware of last month.

The administration and the Democratic-controlled state legislature must figure out a solution to balance the $33 billion budget by the end of the fiscal year on June 30.

This year the administration will pay $696 million in pension payments out of the scheduled $1.6 billion, and $681 million out of next year's planned $2.25 billion payment.

Christie said the payments will go toward covering the costs accrued by active employees, but it doesn't pay down debt built up under previous administrations.

"I'm going to pledge to make the payments that we need to make to not dig the hole any deeper, but in a time when we're confronted with this type of challenge I cannot also pay the sins of my predecessors," Christie said.

His state faces a massive pension debt of $52 billion. New Jersey's credit rating was downgraded for a sixth time last week by a credit rating agency since Christie became governor.

Christie, who's seriously thinking about running for president, had proudly boasted earlier this year that next year's $2.25 billion pension payment would be the largest ever made into the system. He talked about it in his State of the State address and at his numerous town halls, as he argued for more pension reform.

The economic challenges come as Christie chairs the Republican Governors Association, a group that's actively trying to frame a 2014 message that says states with Republican governors are more fiscally sound.

The governor reiterated he does not plan to raise taxes in next year's budget and will veto any bill the legislature puts forward that includes such revenue increases.

"Gov. Christie is once again targeting the middle-class by delaying pension payments, while continuing to protect millionaires," he said in a statement.

"Abandoning pension payments only make things worse down the road," said Assembly Speaker Vincent Prieto. "And that's unfair to taxpayers who rightly deserve and expect better from someone who vowed to fix the state."

Christie pledges not to raise taxes to fix budget mess