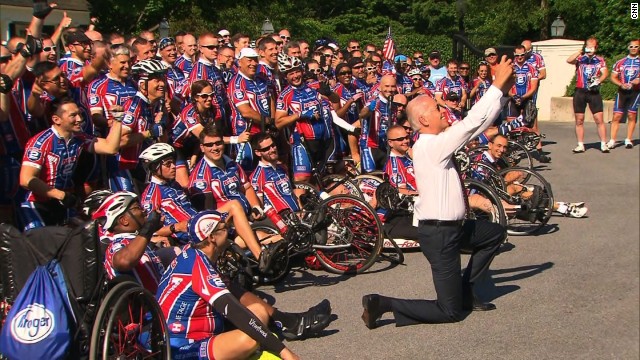 Biden: 'Assume every microphone is on'

(CNN) - Be wary of every microphone.

That was Vice President Joe Biden's advice Monday to a crowd at the kickoff for the Road 2 Recovery Memorial Challenge - where 200 cyclists, including injured veterans, ride 325 miles from Washington to Virginia Beach.

The man introducing the vice president described the day's event similarly to how Biden famously described Obamacare when the President signed the historic health care reform bill into law.

At the 2010 bill signing, Biden turned to Obama and said with a big smile, "This is a big f-ing deal!"

And so the saga of Biden being Biden continued.

"For those of you who don't know, Joe is famous for some of his one liners," the speaker said Monday. "There was a bill signing at the White House...and he said it was a big f-ing deal. And that was a quote...If I may say, sir, Ride to Recovery is a big f-ing deal." (And yes, he did use the actual word.)

In his Memorial Day speech to the riders, Biden said, "Piece of advice about that BFD stuff: Assume every microphone is on."

"I just want you to know, I didn't intentionally say that," Biden continued. "I actually turned and I said, 'Mr. President,' and I whispered in his ear. Unfortunately, I was looking in the direction of one guy who could actually read lips - not a joke. Because no one picked it up at the time and one of the reporters read lips. Thank God my mother was gone or I'd have been one dead vice president."

And what Biden event would be complete without some 2016 presidential fodder?

The speaker introducing the VP said "at some point in the future Joe is going to run for president again."

Hagel on VA scandal: "It makes me sick to my stomach"