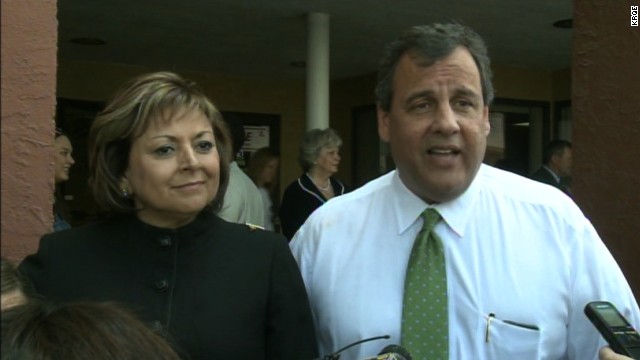 Talking to reporters after a meet-and-greet in Roswell, New Mexico, Christie labeled Martinez "one of my best friends in the entire Republican Governors Association."

The event was the first of a four-stop campaign blitz with the New Jersey governor on Thursday, with most of the day's events being private fundraisers. As RGA chairman, Christie frequently travels and helps raise money for governors like Martinez who are running for re-election.

"I'll come back as often as she asks me to," Christie said.

Christie and Martinez are both Republican executives of blue-leaning states who share a background in prosecution, and the pair formed an early bond four years ago.

As the nation's first Hispanic woman elected governor–and the highest-ranking elected Hispanic female in the GOP–Martinez is frequently mentioned as a possible 2016 vice presidential candidate, especially if Christie runs for president.

Asked Thursday by a reporter if the two could envision a "future partnership" together, Christie brushed off the question but elaborated on their shared style.

"You never know what life's going to bring you, but what I do know is that we've been partners now for three and a half years, bringing reforms to states as Republican governors that aren't used to this kind of thing," he said. "So we'll continue to be partners no matter what our future winds up holding for either one of us, and we're good friends."

Really good friends. In fact, Christie described her as a "friend" or "partner" seven times within the span of roughly three minutes.

Martinez was the only governor that Christie invited to stump for him during his own re-election bid last year. "There are lots of people I could have asked," he said. "We're friends. And so for me to come out here is a personal pleasure, and not just a political trip."

Martinez also heaped praise on her pal from the East Coast.

"I consider him a friend. We're prosecutors from way back. We think alike," she said. "I admire how frank he is, how honest he is, how he just says it like it is and he doesn't do all that political speak. He says what people need to hear and then he follows up with it and follows through with his promises. And that's really important to me for a good leader."

Republicans argue the incumbent governor is poised to win re-election, despite her state becoming increasingly Democratic. In November, she'll face the winner of a crowded, five-way Democratic primary that takes place on June 3.