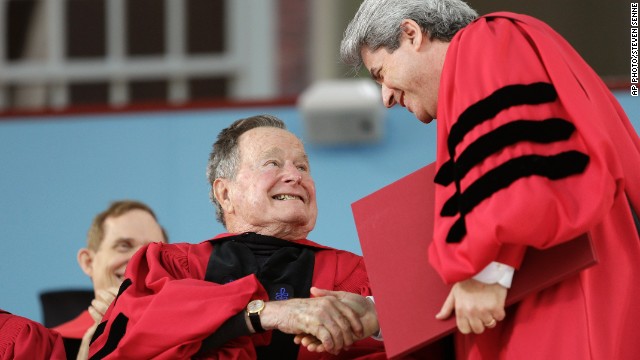 (CNN) – When Harvard University leaders awarded former President George H.W. Bush an honorary degree Thursday, they made sure to mention his alma mater.

"It is seldom on this stage that we take the occasion to honor a former member of the cheerleading squad at Yale," Harvard Provost Alan Garber said in light-hearted remarks about the 41st president.

Bush, sitting on stage, joined the audience as they laughed. Along with cheerleading, Bush played baseball for Yale University, a Ivy League rival of Harvard's, before graduating in 1948.

He was awarded a doctorate of laws at the commencement event, just two weeks before his 90th birthday on June 12.

Garber went on to highlight the president's storied career, noting his time not only as president, but as vice president, CIA director, ambassador to the United Nations, chairman of the Republican National Committee, U.S. congressman and navy pilot in World War II.

When Garber mentioned that Bush married his wife, the former Barbara Pierce, in 1945, Bush looked out into the audience and excitedly pointed to someone in the crowd, presumably to the former first lady. Garber paused while Bush helped lead the audience in applause.

"His cap was blue, his house was white, and now his robe is crimson: George H.W. Bush, doctor of laws," Harvard President Drew Faust said as Bush was presented the degree.

The former president has multiple other honorary degrees, including from Yale, Hofstra University and Dartmouth College.