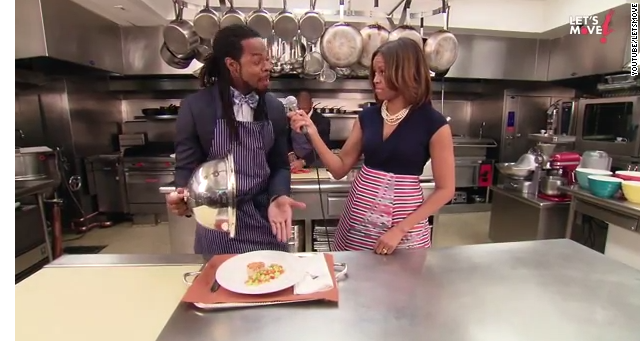 As a part of the first lady's efforts to combat childhood obesity, the Seattle Seahawks star appeared in a video released by the White House on Thursday promoting healthy eating.

"Richard, take me through your final plate," Mrs. Obama said to Sherman after the video shows the Super Bowl champion cornerback whipping up some wholesome grub.

"Well, let me tell you, we the best chefs in the game," Sherman said - mimicking his extensively publicized postgame rant earlier this year after making an amazing defensive play to seal his team’s trip to the NFL title game.

"So when you try us with an easy meal like salmon cakes and succotash, that's the results you're gonna get," he said displaying his culinary work.

Sherman's the latest pro-athlete the first lady's recruited to help with her "Let's Move" initiative. In January, she showed off her basketball moves in a video with the Miami Heat, last year's NBA champions.

On Tuesday, she argued that it's "unacceptable" for House Republicans to consider making major changes to the 2010 child nutrition law. And on Thursday, she took to the pages of the New York Times to accuse the GOP of trying to "override science" for trying to adapt the law.