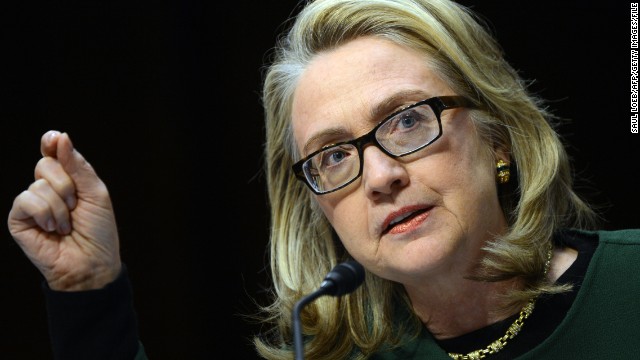 As for Hillary Clinton, half of those questioned in the poll, which was released Tuesday, say they disapprove of how then-secretary of state handled the attack.

What's behind stepped up Republican attacks on Clinton

Steven's death was the first time a U.S. ambassador had been killed on duty in more than 30 years. The Benghazi attack has become a partisan flashpoint around the Obama administration's conduct of foreign policy. Republicans have sharply criticized the administration's handling of the matter from security preparations beforehand, to its response during the attack, and its slow-to-evolve public explanation after-the-fact.

And they have targeted the State Department, and especially Clinton, who is seriously considering a second run for the White House. If Clinton decides to launch a campaign, she'd instantly become the overwhelming front runner for the 2016 Democratic presidential nomination.

According to the poll, 51% say they support another congressional investigation, with 42% saying the incident's been investigated enough already. As you can imagine, the survey indicates a wide partisan divide. Seventy-two percent of Republicans questioned say they back the new investigation, but that number drops to 52% among independents and just 31% among Democrats.

Half of those questioned say they disapprove of how Clinton handled the attack, with 37% saying the approve. Once again, there's a partisan divide, with 78% of Republicans, 58% of independents, but only 22% of Democrats giving the former secretary of state a thumbs down on how she handled the incident.

Clinton testified about the attack last year in front of House and Senate hearings. But Republicans say there are still questions left unanswered.

Clinton said earlier this year that Benghazi was her biggest regret during the four years she served as America's top diplomat.

"It was a terrible tragedy losing four Americans, two diplomats and now it is public so I can say two CIA operatives," Clinton said at a speech in New Orleans.

With the much anticipated release of "Hard Choices," Clinton's memoir of her years as American's top diplomat, just a week away, GOP attacks on her have increased.

Last week the chapter of the book that deals with Benghazi was leaked. As reported by Politico, the chapter highlights Clinton's defense of how she responded to the attack, as well as criticism of Republicans who Clinton says play politics with the deadly assault.

In the chapter, Clinton writes, "As Secretary I was the one ultimately responsible for my people's safety, and I never felt that responsibility more deeply than I did that day."

Clinton, writing in "Hard Choices," also appeared to suggest that she won't take part in the investigation or any of the committee's hearings.

"I will not be a part of a political slugfest on the backs of dead Americans," Clinton writes. "It's just plain wrong, and it's unworthy of our great country. Those who insist on politicizing the tragedy will have to do so without me," wrote Clinton.