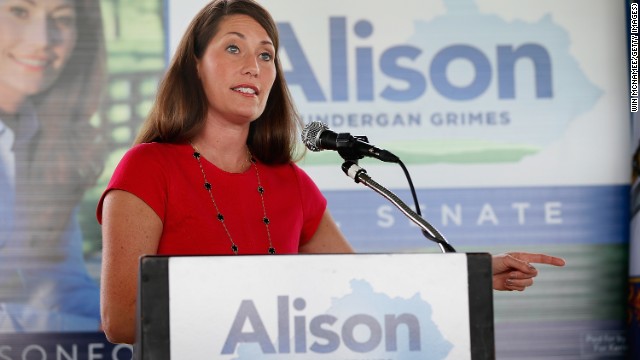 "Mr. President, Kentucky has lost one-third of our coal jobs in just the last three years," Grimes said in the ad. "Now your EPA is targeting Kentucky coal with pie in the sky regulations that are impossible to achieve. It's clear you have no idea how this affects Kentucky."

Grimes' campaign said the spot comes as part of a six-figure campaign highlighting their candidate's stance on coal.

The Kentucky Democrat joins mostly Republicans, but a few other Democrats, from coal and oil states who protest the proposed EPA rules would harm their states' economies and raise energy prices.

Grimes also uses the ad to hit her Republican opponent, Senate Minority Leader Mitch McConnell, who's running this year for a sixth term in office.

"It's bad enough we've lost 18 thousand coal jobs since Mitch McConnell became senator. It's even worse that Senator McConnell says it's not his job to bring jobs to Kentucky. Now you give us this," she said.

"It is a fact that Alison Lundergan Grimes lined up as a delegate behind Barack Obama after he announced he would wage a war on coal and said nothing as thousands of Kentuckians lost their jobs. Her belated concern about the war on coal now that she's a candidate, after helping to ensure it by backing Obama, is insulting and transparently political," said McConnell campaign spokeswoman Allison Moore, in response to the ad.

McConnell's campaign is trying hard to make this election a referendum on Obama, who lost Kentucky by 23 percentage points to GOP nominee Mitt Romney in the 2012 presidential election, and is highly unpopular in the latest polls in the commonwealth. But Grimes is pushing back hard.

After the White House announced the new regulations on Monday, Grimes' campaign was quick to respond, promising that if elected, the Kentucky Democrat would "fiercely oppose the President's attack on Kentucky."

Grimes also sought to distance herself from the President over the Veterans Affairs scandal, calling last month for embattled VA Secretary Eric Shinseki to resign over the controversy that's rocked his agency and again placed the spotlight of scrutiny on the Obama administration.