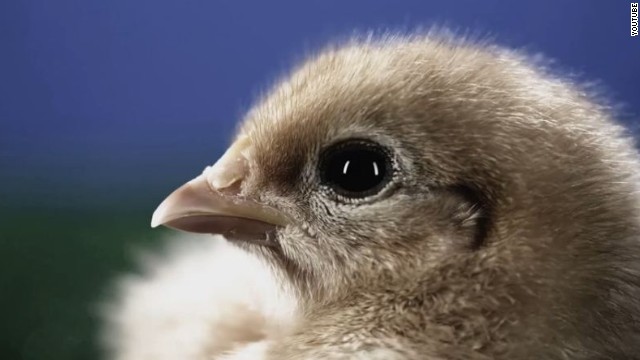 (CNN) - It got ugly pretty quickly in the Senate battle in Iowa, a crucial contest that could decide whether the Republicans take control of the chamber in the midterms.

The campaign of Republican nominee Joni Ernst Thursday charged that the Democratic nominee in the race, Rep. Bruce Braley, is "degrading women by comparing Joni Ernst to a 'chick' in his latest campaign ad."

The Ernst campaign is crying foul over a television commercial titled "Peep" put out Wednesday by the Braley campaign that starred a baby chick. The spot from Braley played off an ad that Ernst went up with earlier this year.

In that commercial, which was the first of her campaign, the candidate said "I'm Joni Ernst. I grew up castrating hogs on an Iowa farm so when I get to Washington, I'll know how to cut pork."

The provocative spot quickly gave statewide and even national attention to the little known state senator. It was followed by another ad that showed Ernst, a lieutenant colonel in the Iowa National Guard, riding up to a gun range on a motorcycle.

The commercials put Ernst in the spotlight and arguably helped turn her into the front runner in the free-for-all battle for the GOP Senate nomination. Ernst ended up winning Tuesday's primary by a landslide.

Ernst hopes to make history in November as the first woman to represent Iowa in Congress. The general election winner will succeed longtime Democratic Sen. Tom Harkin, who is retiring at the end of the year. If the Republicans can flip Harkin's seat and five other Democratic held seats, they would win control of the Senate.

Braley, who was unopposed in the Democratic primary, went up Wednesday with his spot attacking Ernst's record in the state legislature.

"We've all heard the one about pigs squealing. But when Joni Ernst had the chance to do something in Iowa, we didn't hear a peep. In the state Senate, Ernst never sponsored a bill to cut pork. Never wrote one measure to slash spending. In fact, the Iowa Republican said she backed measures to actually increase spending. Joni Ernst ads are hard to forget, but her record just doesn't cut it," said the narrator in the ad.

"Let's not forget that national Democrats have made claims of misogyny and unfair attacks against women the centerpiece of their electoral strategy. Does anyone doubt that if a male Republican candidate ran an ad comparing a female Democratic candidate to a chick, reporters' inboxes would be filled with outraged press releases demanding that the ad be condemned and taken down? Of course not," wrote NRSC press secretary Brook Hougesen, in an email to reporters.

And Ernst spokesperson Gretchen Hamel put out a statement saying that Braley "degrades and insults Iowa women by comparing Joni Ernst to a 'chick.'"

"That we still haven't heard a peep from state Sen. Ernst's campaign on the substance of our ad shows just how clearly her record does not live up to the image she's portraying on TV. The facts matter, and the truth is, state Sen. Ernst talks a lot about cutting pork, but her actions are something else entirely," said Braley campaign manager Sarah Benzing.