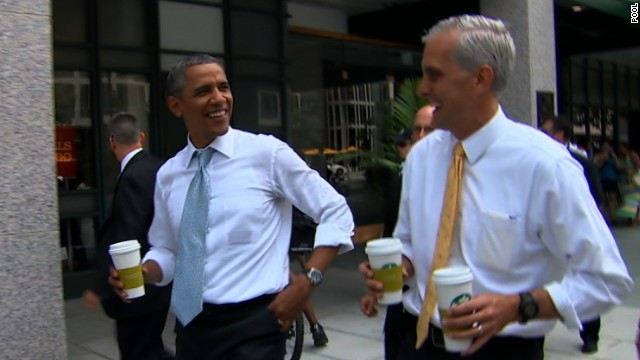 Washington (CNN) – The afternoon coffee run – it's a must for office workers worldwide, including, apparently, President Barack Obama.

At around 2:30 p.m. ET on Monday, the commander-in-chief – with little warning to his aides, security detail or the press that follow him everywhere – burst the White House bubble and walked a block to the nearest Starbucks.

Joined by his chief of staff Denis McDonough (and accompanied by Secret Service agents), Obama told reporters he'd ordered "just a tea." Paper cups in hand, the pair moseyed back down the street, waving at tourists, chatting to construction workers, and generally enjoying Washington's late-spring sunshine.

While still rare, Obama has begun enjoying more spontaneous departures from the tightly-controlled security of the White House. Last month he surprised tourists near the Executive Mansion during a stroll to the Interior Department a few blocks away.

In May the President also made a stop at a Washington location of the burger joint Shake Shack and even made a surprise visit to a little league practice.

Obama's even developed a catchphrase for his last-minute outings - as he said during his stroll to the Interior building, and repeated again on Monday, "The bear is loose."