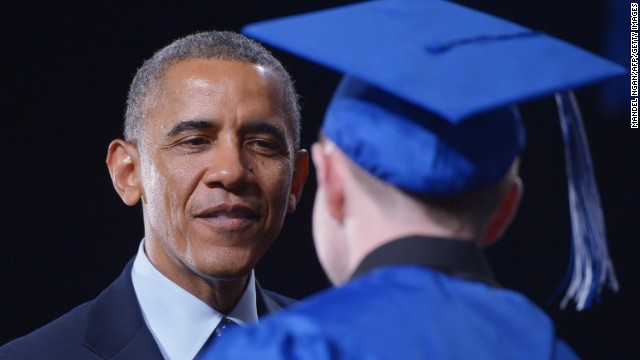 Worcester, Massachusetts (CNN) – One by one, as students from Worcester Technical High School walked across the stage in cap and gown to collect their diplomas they stopped to shake the hand of a very special commencement speaker, the President of the United States.

Mr. Obama gave each one a hearty congratulations and a pat on the back. Some gave the President a hug and a peck on the cheek.

There was a defining, high-pitched roar inside the DCU Center arena in Worcester where the commencement took place as Obama walked on stage.

In 2006, Worcester Tech was one of the lowest performing schools in the state. Today, it's among the top high schools in Massachusetts with 95% of its students graduating within four years and many going on to college. The school's principal, Sheila Harrity, was recognized at the White House last month as a national principal of the year. In 2013, Worcester Tech became a U.S. Department Of Education Blue Ribbon School.

President Obama came to this graduation ceremony to highlight a school that he called "a model for the rest of the country to follow."

As he called on the nation to learn from Worcester Tech, the President commended the high school for producing graduates with skills that they'll be able to put to use in the work place right away such as rebuilding a car engine, running a restaurant and fixing a computer. He said they acquired the skills needed "to fix America."

"The thing I really want to do here today is for the nation to learn from Worcester Tech," said President Obama. The school not only teaches students skills that they will be able to use in the job market right after graduation, Worcester Tech's is home to a beauty salon, community meals program and a veterinary clinic that are all well used by the surrounding community.

In his speech, the President took a swipe at Republicans for blocking legislation sponsored by Massachusetts Sen. Elizabeth Warren that would allow people to refinance their student loans at a lower rate. When that elicited boos from some students President Obama said, "Don't boo, just remember to vote."

As he talked about the importance of making a higher education affordable, he told the audience that he is not giving up on his goal to cap student loan payments at 10% of a person's annual salary.

Most people would have a tough time recalling who their commencement speaker was at their high school graduation. It's safe to say that these students will never forget their special guest.

Class president Reginald Sarpong sat next to the President on stage.

Sarpong was just 11 years old when he came to the United States with his family from Ghana. Dressed in colorful traditional Ghanaian tunics while seated in the audience, his family was beaming with pride as they watched him chat with President Obama.

Sarpong said it was difficult to maintain his composure. When he first learned that he was going to sit next to President Obama on stage, Sarpong said he thought it was a prank.

"(Obama) asked me how I was feeling sitting next to him and he assured me that it was alright, that there was nothing to be worried about. He calmed my nerves," he said.