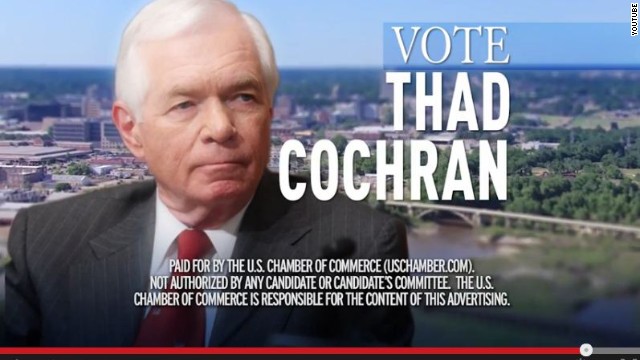 Washington (CNN) – As the Mississippi GOP Senate runoff contest is about to enter into its final week, the U.S. Chamber of Commerce is getting ready to go up with a new television ad for embattled incumbent Sen. Thad Cochran, CNN has learned.

Cochran is squaring off against tea party favorite Chris McDaniel, a state senator, in a June 24th runoff.

Sources describe the ad buy as “significant,” but would not provide further details.

This is the Chamber’s first effort in the runoff contest. It spent about $600,000 in the primary for Cochran.

The commercial, which begins running Monday, touts the six-term senator's stature in the state, touting newspaper descriptions of him as “respected” and “a tested leader fighting for Mississippi."

The spot also picks up on a theme Cochran has been emphasizing on the campaign trail: how he will use his power and stature in the state to make sure it gets federal dollars. The new Chamber ad says Cochran is “dependable…never budging on his commitment to deliver for Mississippi every day.”

The National Association of Realtors, another groups with establishment ties, went on airwaves in Mississippi with an ad in support of Cochran. The spot, running in several markets, will stay on the air until the runoff.

Both the Cochran and McDaniel campaigns have gone up with new commercials since the June 3rd primary.

McDaniel has also received support from major support from tea party and conservative groups, including the Club of Growth, which announced on Thursday its own new ad campaign for the challenger. The group said they were spending six-figures to run TV and radio spots statewide through the runoff election.