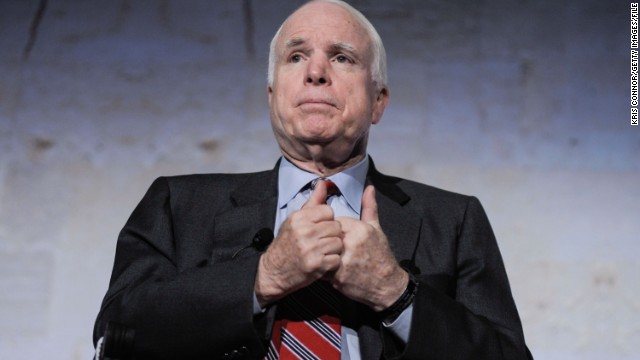 (CNN) – Sen. John McCain added Chairman of the Joint Chiefs of Staff Gen. Martin Dempsey to his list of people the President should fire over the deteriorating situation in Iraq.

In an interview Friday on CNN’s “The Situation Room with Wolf Blitzer,” the Arizona Republican also called for the United States to conduct airstrikes in Iraq to stop advances by the militant group the Islamic State in Iraq and Syria, or ISIS.

Asked whom he thinks should be fired, McCain said: “Chairman of the Joint Chiefs of Staff, number one.”

McCain faulted the Obama administration for failing to make a status of forces agreement with Iraq that would have left residual forces in the country to help maintain stability. He’s also accused the administration of being weak on foreign policy, particularly when it comes to Syria.

When Blitzer noted that the decision not to conduct airstrikes in Syria was made by the President, not Dempsey, McCain argued that Dempsey is a key adviser to the President.

“The chairman of the joint chiefs of staff has done nothing but invent ways for us not to be engaged,” McCain said, referring to Iraq. “I've watched him and observed him for years, and I do not believe that he's doing the job that should be done for the American people.”

McCain said “we should be doing airstrikes now” in Iraq, an option that the President has not ruled out. However, Obama said Friday that the United States is not going to get involved in Iraq militarily again without assurances that the government there is working toward a political solution.

McCain, the 2008 GOP presidential nominee who’s long been a critic of Obama’s foreign policy, reiterated that the President should fire his national security team, including National Security Adviser Susan Rice.

While he said he doesn’t have “a lot of confidence” in Secretary of State John Kerry and Defense Secretary Chuck Hagel, McCain said the two former senators were not in the Obama administration when “some of these most crucial decisions were taken” with regard to Iraq and Syria, so he didn’t call for their resignations.

McCain also pushed for the administration to bring back Gen. David Petraeus, who served as the commander of the coalition forces in Iraq, saying he should be dispatched “on the next plane to Baghdad.”

“He has influence with those people. He knows them all,” McCain continued.