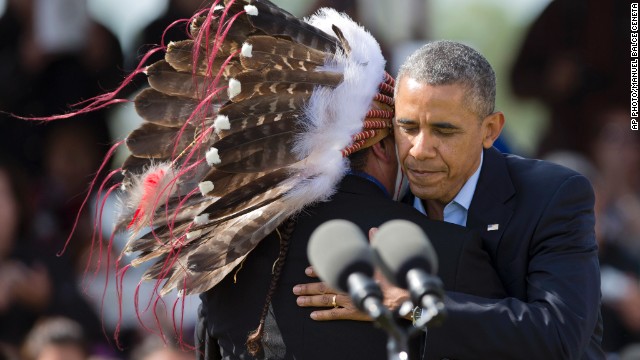 (CNN) – President Barack Obama made his first trip as President to an Indian reservation on Friday and attended a traditional pow wow to signify his commitment Native Americans.

“I’m proud that the relationship between Washington and tribal nations is stronger than ever,” Obama said. “My administration is determined to partner with tribes and it’s not something that just happens once in a while. It takes place every day in just about every issue that touches your lives.”

The White House has released a “Blueprint for Reform,” a plan from the Departments of the Interior and Education that recommends reforming the Bureau of Indian Education to include more tribal sovereignty in operations of tribal schools.

“Let’s put our minds together to improve our schools because our children deserves a world-class education … that prepares them for college or careers. And that means returning control of Indian education to tribal nations with additional resources and support so that you can direct your children’s education and reform schools here in Indian Country,” the President said.

The President first announced his trip last week with an op-ed published in the online and print publication Indian Country Today, where he touted his administration’s commitment to fulfilling broken promises to American Indians.

“The history of the United States and tribal nations is filled with broken promises. But I believe that during my Administration, we’ve turned a corner together,” he wrote. “We’re writing a new chapter in our history - one in which agreements are upheld, tribal sovereignty is respected, and every American Indian and Alaskan Native who works hard has the chance to get ahead.”

First lady Michelle Obama joined her husband for the Cannon Ball Flag Day Ceremony pow wow, which is part of a three-day celebration of colorful tribal dancing. The Obamas were presented a gift of a quilt and shawl of the Sioux nation.

Obama campaigned in 2008 in Crow Country, Montana, for the Democratic primary there. During his visit, he was adopted into the Crow Nation and given the Native American name “One Who Helps People Throughout the Land.” He joked in 2010 that when Michelle Obama heard that, she said, “You should be named ‘One Who Isn’t Picking Up His Shoes and His Socks.’”