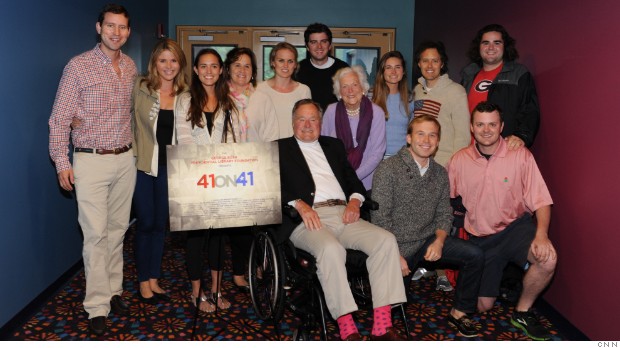 (CNN) - Surrounded by family and friends, former President George H.W. attended an advanced screening of “41ON41” on Friday as part of his 90th birthday festivities.

The film is about the life and legacy of President George H. W. Bush, as told by interviews with 41 people who know him best.

"Before the film began, the audience of over 400 people was treated to footage of the President’s skydive the day before, accompanied by “41ON41” interviewee retired Sergeant Michael Elliott of the U.S. Army Golden Knights," Cary said.

The standing-room-only crowd included several of the 41 interviewees from the film, including Bush's daughter Doro Bush Koch.

"'41ON41' is a wonderful portrait of an amazing man through the voices of 41 people who know him well," Koch told CNN. "I'm excited for the world to know more bout my extraordinary Dad."

The movie was shown at the 14-screen Cinemagic Theater in Sacco, Maine near Bush's Kennebunkport home. To add the celebration, Cary tells CNN that the theatre the screening occurred in, theater #9, was fittingly renamed theater #41 for the night.

At the end of the screening, the audience gave a standing ovation to President and Mrs. Bush