(CNN) - Paul Bremer, former presidential envoy to Iraq, said Monday that there will have to be special forces on the ground to fight the insurgency from militant groups in Iraq.

In a tense exchange with CNN's Erin Burnett on "OutFront," Bremer also blamed President Barack Obama for pulling out all forces in 2011 instead of leaving a residual troop presence to ensure security in the region.

END_OF_DOCUMENT_TOKEN_TO_BE_REPLACED

Washington (CNN) – A new round of scrutiny hit the IRS on Monday as senators from both parties summoned the agency’s chief to Capitol Hill, one House committee set up a new investigative hearing and another issued a subpoena for the head of the agency to appear.

This came after the IRS announced that up to two years of e-mails from former agency manager Lois Lerner were destroyed when her hard drive crashed in 2011. Lerner ran the IRS division that oversaw tax-exempt status and is a key figure in the investigation into why the agency targeted tea party and other groups. The IRS says it has worked to recover the Lerner e-mails by searching through the accounts of dozens of employees who may have corresponded with her.

END_OF_DOCUMENT_TOKEN_TO_BE_REPLACED

Christie: Fallon can talk you into doing things you wouldn't 'normally talk yourself into'

(CNN) - Chris Christie says he expects his widely-publicized dance performance with Jimmy Fallon that lit up social media may prompt future requests for him to bust a move.

END_OF_DOCUMENT_TOKEN_TO_BE_REPLACED

Christie doesn’t want N.J. to wind up like Detroit due to 'unsustainable' pensions

(CNN) - New Jersey Gov. Chris Christie believes the state will resolve its budget problems, but reiterated he won’t raise taxes to do it and will stick to his plan to cut pension payments to stem the red ink.

Appearing on the “Ask the Governor” program on New Jersey 101.5 on Monday, Christie argued again that public pension and health care obligations are unsustainable over the long term, and tough medicine is needed to close an $807 million budget shortfall.

END_OF_DOCUMENT_TOKEN_TO_BE_REPLACED

UNLIKLEY ALLY: COULD THE U.S. WORK WITH IRAN IN IRAQ? The United States could end up cooperating with Iran to stop militant gains in Iraq, Secretary of State John Kerry suggested Monday in an interview with Yahoo!News. But Kerry didn't indicate that cooperation with Iran is under active discussion inside the administration.
END_OF_DOCUMENT_TOKEN_TO_BE_REPLACED 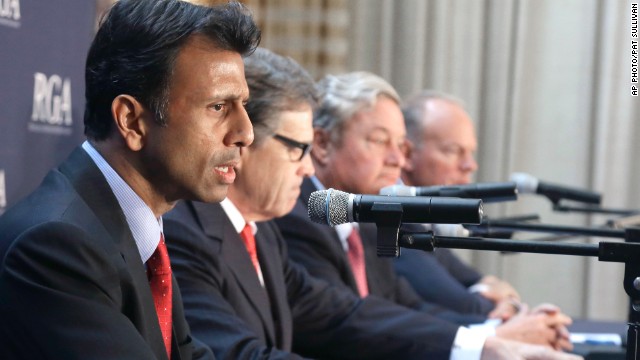 END_OF_DOCUMENT_TOKEN_TO_BE_REPLACED

What do you want to ask Hillary Clinton? Send your questions here and CNN Chief International Correspondent Christiane Amanpour might ask it during CNN's town hall meeting with Clinton at 5 p.m. ET Tuesday at the Newseum in Washington.

(CNN) – Six in 10 Americans are dissatisfied with the way the Obama administration has handled the deadly terror attack on the U.S. diplomatic compound in Benghazi, Libya, a new poll shows.

The CNN/ORC International poll released on Monday indicates only 37% are satisfied with the administration’s response to the September 2012 assault that killed four Americans, including the ambassador to Libya.

END_OF_DOCUMENT_TOKEN_TO_BE_REPLACED

Obama order would ban contractor bias based on sexual orientation

Washington (CNN) – President Barack Obama will sign an order barring federal contractors from discriminating against employees "on the basis of sexual orientation or gender identity."

White House spokesman Josh Earnest told reporters on Monday that specifics "are still being finalized," but the order would "build upon existing protections" around race, ethnicity and religion for those employed by entities doing business for the government.

END_OF_DOCUMENT_TOKEN_TO_BE_REPLACED

What do you want to ask Hillary Clinton? Send your questions here and CNN Chief International Correspondent Christiane Amanpour might ask it during CNN's town hall meeting with Clinton at 5 p.m. ET Tuesday at the Newseum in Washington.

Washington (CNN) - Just how inevitable is a Hillary Clinton victory in 2016?

More than three-quarters of all Americans predict that Clinton will win the Democratic nomination if she runs for the White House, and two-thirds say she is likely to be the next president if she is the party's standard-bearer in 2016, according to a new CNN/ORC International poll.