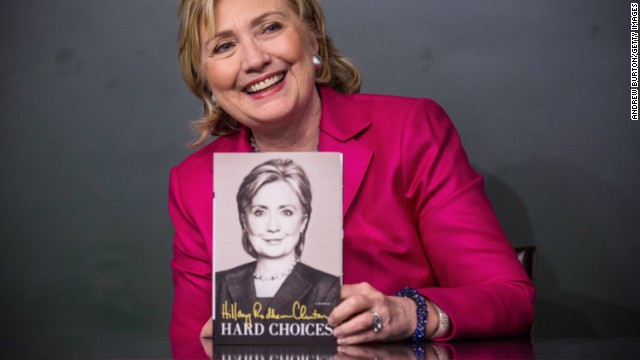 Washington (CNN) – Hillary Clinton's frenetic book tour appears to have paid off: In its first week on the market, her memoir "Hard Choices" was the most purchased hardcover nonfiction book in the United States, according to Nielsen Bookscan data.

Booksellers who report to Nielsen – which makes up roughly 85% of all retail book sales – have sold approximately 86,000 physical copies of "Hard Choices" since June 10, according to the data provided to CNN by Nielsen.

The Nielsen numbers do not include tablet and e-book sales. On Tuesday, a source with Simon & Schuster, Clinton's publisher, told CNN that roughly 100,000 copies of "Hard Choices" were sold in the book's first week when you combine hardcover, e-book and preorders.

The figure also makes "Hard Choices" the second most purchased hardcover book in both nonfiction and fiction this week, according to a publishing source who provided CNN with the Nielsen data.

10 things our poll tells us about Hillary Clinton

"Written in My Own Heart's Blood," the latest installment of Diana Gabaldon's fictional Outlander series, narrowly outsold "Hard Choices" in hardcover sales, according to the numbers.

And when including hardcover and paperback titles, Clinton's memoir came in fourth, behind Gabaldon and two editions of "The Fault in Our Stars" by John Green, a book that was catapulted to the top spot by a recent movie under the same name.

"Simon & Schuster is thrilled with Hard Choices' strong start right out of the gate, and the terrific feedback we're hearing from reviewers, retailers, and, most importantly, readers,” Jonathan Karp, president and publisher of Simon & Schuster, said in a statement. “We're confident we have a major bestseller."

Karp added, “Hard Choices is on a trajectory to being the best-selling nonfiction book of the year."

Both Clinton supporters and critics will closely watch how the public receives "Hard Choices." Clinton has admitted that she is considering a run at the presidency and has appeared and sounded more like a candidate during her book tour.

If the book sells well, supporters will tout the number as a sign of the former first lady's support. If the book flops – or sells worse than Clinton's last memoir "Living History" – the former senator's critics are sure to use it as a sign of Clinton's waning support.

"Living History," Clinton's 2003 memoir about her eight years as first lady, sold over one million copies, according to Nielsen data. There was no e-book market at the time, so all of Clinton's sales came from print purchases.

Barnes & Noble, the country's largest bookseller, told Buzzfeed on Monday that just over 24,000 copies were sold through the retailer.

When contacted by CNN, Mary Amicucci, a vice president at Barnes & Noble, said "Hard Choices remains the number one selling non-fiction book since it’s on sale date and we expect it continue to sell well through the summer," but she would not confirm the 24,000 figure.

Clinton's book first went on sale on June 10 and since then Clinton has crisscrossed the United States and Canada in an effort to sell her memoir and stay in the public eye.

So far, Clinton's book tour has held events in New York, Chicago, Philadelphia, Washington, D.C., Toronto and Boston. Clinton will hold two book events on Wednesday: one in Edmonton in Canada and another in Seattle. And in the coming week Clinton will appear in Los Angeles, Austin, Denver and San Francisco.

With a coordinated war room and surrogate operation, the tour has looked a lot like a campaign and has just heightened the talk around whether Clinton will run for president in 2016.