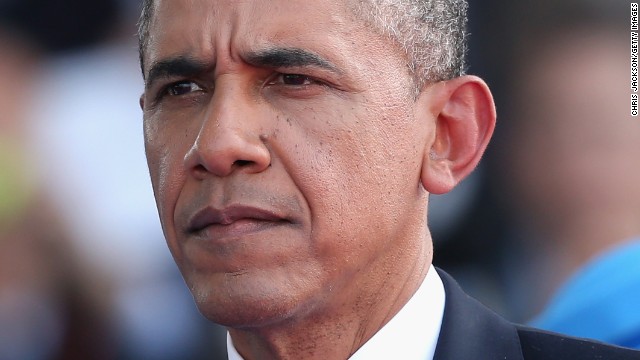 Poll: Can Obama get the job done?

A new NBC News/Wall Street Journal survey indicates that Americans are questioning the President's ability to run the government and lead the country.

In a separate question, 11% said they very confident in the way the Obama administration was managing the federal government, with 39% saying somewhat confident, 19% saying not too confident and just over three in ten saying they were not confident at all in the administration's performance.

The poll's Wednesday release comes as the scandal rocking the Department of Veterans Affairs has dominated headlines the past month. It's the latest controversy of the past year, following the NSA snooping scandal, the controversy over the IRS targeting of some conservative non-profit groups, and the rough rollout of the new federal health care law.

Facing numerous international challenges, including the new bloodshed in Iraq, the civil war in Syria, and the fighting in Ukraine, as well as the controversial swapping of five Taliban prisoners held at Guantanamo Bay for the release of a U.S. soldier held captive in Afghanistan, the poll indicates just 37% of Americans say they approve of how the President's handling foreign policy. That's an all time low in NBC News/Wall Street Journal polling.

The survey's Wednesday release comes a week after a CNN/ORC International poll indicated that only 40% of the public gave Obama a thumbs up on foreign policy, matching an all-time low for the President on the issue in CNN polling.

The NBC News/Wall Street Journal poll was conducted mostly before the capture of major swaths of northern and central Iraq by the militant group Islamic State in Iraq and Syria (ISIS) dominated the news cycle, and the CNN poll was conducted entirely before those events. As a result, neither survey completely reflects any changes in public opinion due to the crisis in Iraq. Nonetheless, both polls indicate a growing dissatisfaction among Americans over how Obama has handled major international flashpoints and national security controversies.

"Another wild card is the capture yesterday of Benghazi suspect Ahmed Abu Khattala, so it will take several days to be able to measure how that event has affected views of Obama," said CNN Polling Director Keating Holland. "And if Obama takes military action in Iraq, he might get a boost in support due to what pollsters sometimes call a 'rally-round-the-flag effect'. So a week or two from now, Obama's numbers on foreign policy could be up, down, or anywhere in between."

The President's approval rating in CNN Poll of Poll averages stood at 47% a year ago, but dipped to 41% last November and December. The average edged up slightly to 43% in the late winter and early spring.

So how does Obama's approval compare to his most recent two-term predecessors in the White House at this point in their presidencies?

There is a silver lining in the new poll for the President. As low as his numbers are, only 29% have a favorable view of the Republican Party.

The NBC News/Wall Street Journal poll was conducted June 11-15, with 1,000 adults nationwide questioned by telephone. The survey's overall sampling error is plus or minus 3.1 percentage points.