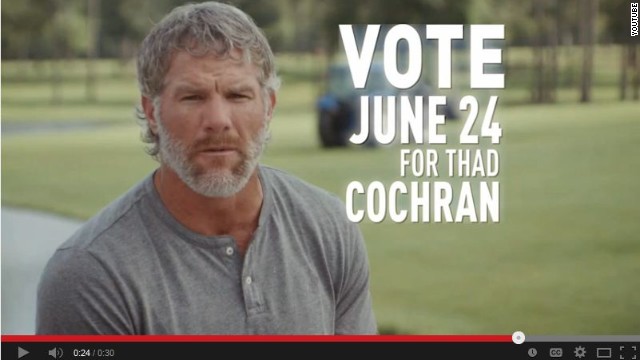 Brett Favre turns out for Thad Cochran in new ad

(CNN) - The Chamber of Commerce has turned to a big gun as it tries to help Republican Sen. Thad Cochran of Mississippi across the goal line in next Tuesday's primary runoff.

Mississippi native and retired NFL star Brett Favre, who was named MVP and led the Green Bay Packers to a Super Bowl win in 1997, stars in the Chamber's new spot lauding Cochran and his efforts to help the state.

"I have learned through football strong leadership can be the difference between winning and losing. And when it comes to our state's future trust me Mississippi can win and win big with Thad Cochran in Washington," he says in the spot. "Thad Cochran always delivers just like he did for Katrina."

This is the Chamber's second ad for the runoff and is aimed at appealing to Reagan Democrats in the state hoping to help boost turnout for the endangered incumbent.

The six-term senator is locked in a bitter battle with tea party favorite Chris McDaniel in the runoff. Cochran has emphasized how much his tenure in the Senate has brought to the state while McDaniel, a state senator with the backing of major anti-establishment groups, has said it is time for new leadership.

The Chamber has been leading the charge for the establishment forces hoping it can help Cochran squeak out a victory. It will have spent over $1 million between the primary and runoff on Cochran's behalf. Several tea party and conservative groups–such as the Club for Growth, the Citizens United Political Victory Fund, the Senate Conservatives Action PAC , FreedomWorks, the Tea Party Patriots, and the Tea Party Express–have run ads backing McDaniel or helped with get-out-the-vote efforts in support of the candidate.