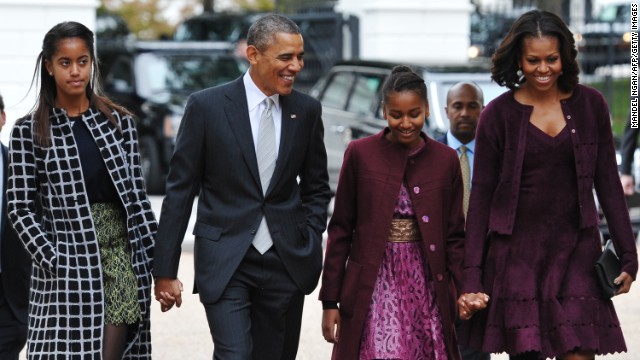 Washington (CNN) - President Barack Obama and first lady Michelle Obama agreed their two daughters should have an understanding of what it's like to earn a paycheck at a minimum wage job.

In an interview with Parade magazine released Friday, the first couple was asked if they think their teenage daughters, Sasha and Malia, should experience the kind of minimum wage jobs they did growing up.

"Oh, yeah. I think every kid needs to get a taste of what it's like to do that real hard work," Mrs. Obama said.

The President added: "We are looking for opportunities for them to feel as if going to work and getting a paycheck is not always fun, not always stimulating, not always fair. But that's what most folks go through every single day."

The President told Parade he scooped ice cream at Baskin Robins and worked as a waiter at an assisted living facility. Michelle Obama said she worked at a bindery while she was in high school. That experience, she said, gave her "an understanding that more is needed for folks to be able to cobble together a decent life on minimum wage."

The Obamas said they struggled financially after they both finished law school. And though they were not poor, they said they lived upstairs at Michelle's mother's house for some time.

The interview comes ahead of the Working Families Summit, an event the Obamas will host Monday in Washington, to discuss fair workplace practices.

The White House has made the issue of raising the minimum wage a hallmark of the President's second term agenda. In February, Obama announced that, starting in 2015, businesses with new or renewed federal contracts will have to pay their minimum wage workers $10.10 an hour - an increase from the country's federal minimum wage of $7.25 mandated through executive order.

Congress failed in April to approve a bill raising the federal minimum wage. Democrats and Obama blasted Republicans for their opposition to the initiative, framing the issue ahead of November's midterm election as polls indicate a majority of Americans are in favor of boosting the minimum wage.

Another issue the White House is highlighting of late is equal pay. Asked if she felt she was paid fairly during her career in law, Mrs. Obama said she didn't think about it - and that was a problem.

"When I got hired in my firm, I was grateful. There wasn't even a thought of negotiating at all. I thought I was there to do a good job," she said. "Now I realize that that's one of the challenges that we have as women: We don't negotiate for ourselves."