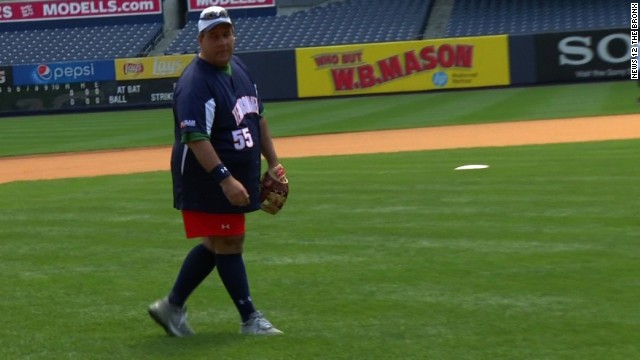 The New Jersey Republican joined a number of sports stars and celebrities to play in an annual charity softball game fundraising for the Boomer Esiason Foundation - an organization aimed at finding a cure for cystic fibrosis - as well as for the Wounded Warrior Project.

Christie said the biggest difference between Monday's game, held at Yankee stadium, and his days as a high school catcher in New Jersey is about 40 years’ time.

"I'm 40 years older, you know 35 years older, that's about it. So that's the biggest difference. And then probably the way I play but we'll have to wait to see that," he told reporters before the game.

Christie, a potential 2016 presidential candidate and regular on WFAN’s sport show Boomer & Carton, played nine innings, fulfilling a promise he made a few weeks ago to co-host Boomer Esiason that he would participate in the annual softball game.

Christie, wearing number 55, played third base, which he said he's played when he was older “…after I couldn't stay in a squat for nine innings" as catcher.

"I came in with my Mets stuff on but then they gave me this uniform," he said, noting that his red and blue get-up was the same as his beloved Mets.

CNN's Dana Davidsen and Ashley Killough contributed to this report.