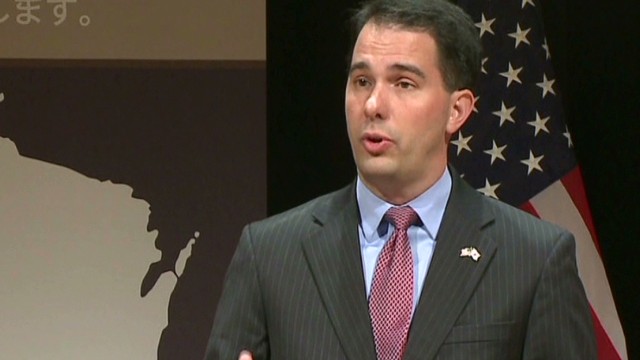 (CNN) - Wisconsin Gov. Scott Walker is not currently the focus of an investigation into allegations of illegally coordinated fundraising efforts between the governor's campaign and outside conservative groups in the midst of a heated 2012 recall campaign, according to a statement released Thursday by a lawyer representing the special prosecutor heading the probe.

That probe is currently on hold, pending a legal challenge from the Wisconsin Club for Growth, one of the conservative groups in question.

Crocker noted in his statement that "at no time" has Walker, a potential 2016 GOP White House contender, "been served with a subpoena."

"Mr. Schmitz has made no conclusions as to whether there is sufficient evidence to charge anyone with a crime," Crocker added.

Walker's 2014 re-election campaign quickly seized on Crocker's statement, releasing a statement blasting earlier "slanderous reporting" from the media and calling on journalists to "report the real facts of this story."

Documents released last week indicated that Walker and two top aides were part of a "criminal scheme" to bypass state election laws prohibiting coordination between the governor's campaign and other organizations.

But Crocker stressed Thursday that it is "wrong for any person to point to (those words) in a legal argument as a finding by the special prosecutor that Governor Walker has engaged in a criminal scheme. It is not such a finding."

"While these documents outlined the prosecutor's legal theory, they did not establish the existence of a crime," Crocker said. "They were arguments in support of further investigation to determine if criminal charges against any person or entity are warranted."

A federal judge ordered the documents unsealed following claims from Wisconsin Club for Growth that the organization was unfairly targeted by partisan prosecutors infringing on its First Amendment rights.

The release of the documents came less than five months before the midterm elections, when Walker will be on the ballot for another four-year term in office.

According to the documents, Schmitz's investigation focuses on a wide-ranging scheme to coordinate activities of several organizations with various candidate committees to thwart attempts to recall Walker and some Republican state lawmakers.

Walker, who was elected governor with the support of the tea party movement, set off a firestorm in January 2011 when he moved to curtail the collective bargaining rights of most Wisconsin state employees.

With majorities in both houses of the legislature, Walker and his GOP allies voted to limit raises for public employees (except police and firefighters) to the rate of inflation, bar unions from deducting dues from workers' paychecks and force them to hold a new certification vote every year.

That bill was signed into law in March of that year, following weeks of protests at the state Capitol building in Madison that captured national attention.

Later that year, the state Supreme Court upheld the controversial law, but the battle sparked a storm of political activism that led to the recall effort.