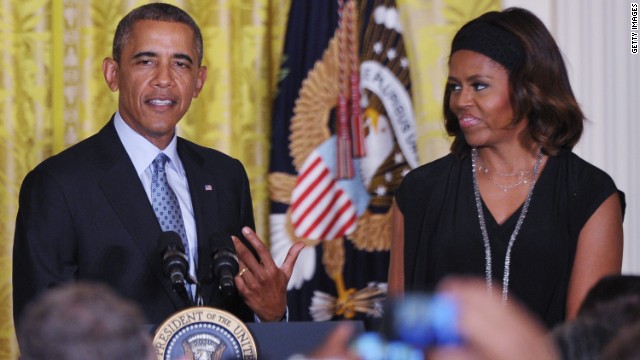 White House (CNN) - President Obama thanked his gay college professor Monday for being an influence on shaping his thoughts about gay rights issues.

“He was the first openly gay person that I knew who was unapologetic, who stood his ground,” Obama said. “He helped shape how I think about so many of these issues, and those sort of quiet heroes that sometimes don’t get acknowledged.”

Goldyn taught political science at Occidental College when Obama began studying there in 1979. Obama said that the two became really good friends and praised Goldyn for not being shy about his sexual orientation.

“If somebody gave him guff, he’d give them guff right back, and was, I think, part of a generation that really fought so many battles that ultimately came into fruition later,” the President said.

His former professor also was an adviser to lesbian, gay, and transgendered students. He changed careers and became a doctor who ran an AIDS clinic and now runs a health center.

President Obama celebrated other accomplishments of the gay and lesbian community since last year’s event.

“A lot has happened in the year since we last gathered here together. Same-sex marriage has gone into effect in 10 more states, which means that 43 percent of Americans now live in states where you’re free to marry who you love. The NFL drafted its first openly gay player,” he said to nearly 500 guests in the East Room.

Two weeks ago, President Obama announced plans to sign an executive order prohibiting federal contractors from discriminating against employees based on sexual orientation or gender identity. Many companies have such a policy in place but currently there is no federal law.

“The majority of Fortune 500 companies already have nondiscrimination policies to protect their employees because it’s the right thing to do and because many say it helps to retain and attract the best talent. And I agree. So if Congress won’t act, I will,” he said.

He encouraged the members of the gay, lesbian, and transgendered community to not give up on making continued progress.

“We’ve got a lot to be proud of, but obviously we can’t grow complacent. We’ve got to defend the progress that we’ve made. We’ve got to keep on reaching out to LGBT Americans who are vulnerable and alone, and need our support,” Obama said.