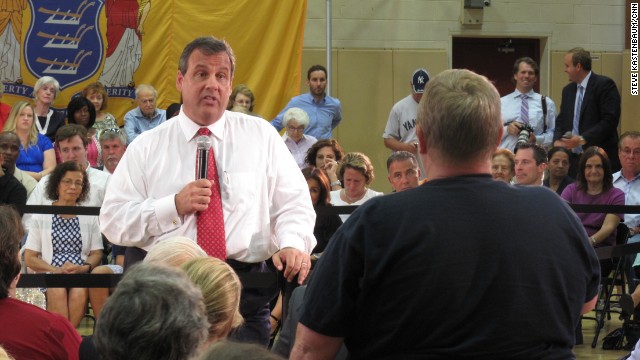 Protesters interrupted the governor several times during his 123rd town hall in the suburb of New York. There were also tense exchanges between Christie and two audience members.

At other recent town halls Christie largely ignored similar outbursts and waited for police to escort protesters out of the room. This time, however, the governor not only acknowledged the outbursts, he shot back at a few people.

It started with a group of public school teachers seated in the audience of approximately 300 people.

A few of the teachers booed as he said there were 6,000 fewer public sector employees in New Jersey today than there were when he first took office.

"There's going to be people that don't like it. That's fine. They can express themselves and feel free to express themselves," the Republican governor said. "I'm going to keep my word and not do, not do things that are going to make this government bigger and more expensive for the people who have to pay the bills."

Calling the state's healthcare benefit a “Cadillac plan” he warned that under Obamacare the state will be fined $261 million dollars in 2018. Undeterred, the teachers continued to applaud every time the governor talked about how much money the state spends on their benefits.

In a familiar refrain, Christie acknowledged that budget cuts are not easy decisions.

"If you run for this job to be loved you are guaranteed to be a failure. I didn't come here to be loved," said the governor.

The town hall didn't get any easier for Christie when he transitioned to the question and answer portion of the program.

Twice, college age students stood up and interrupted the event with the 'mic check' call and answer tactic made popular by Occupy Wall Street demonstrators. As they shouted at the governor about his education and immigration policies, police escorted them out of the room without incident.

Christie has ignored similar outbursts in the past. But this time, as they were led out by police, he remarked: "What I like about this, if it was really something heartfelt why did they have to read it off of their iPhones?"

He accused the protesters of getting their marching orders from public sector unions.

The most tense exchange happened when Christie called on a woman who came prepared with a speech full of information about the Common Core education initiative.

"I'm begging you, don't implement Common Core," said the woman as she claimed the policy would earn Microsoft and Pearson Publishing millions of dollars. She called education standards an evil takeover of the public school system.

Christie shot back that something has to be done in New Jersey's failing school districts.

As the woman tried to interject the governor said, "I listened to you for a long time and you read to me everything and I was really patient so now you are going to listen to me." He told the woman, "We need to make changes. Whether Common Core is that change or not is something that is obviously open to vigorous debate."

The confrontations didn't end there.

Donna Jackson, an activist with the Newark-based group United Parents Network, started shouting at the governor that he was wrong and he was destroying the public schools.

Christie responded: "You and I have had plenty of private conversations. Don't make a scene here and a spectacle when you get the opportunity to speak your mind privately."

As she was led out by a police officer, Christie said, "See you later."

As he wrapped up the town hall it looked like he had heard the last of it from his detractors. But then, a woman yelled out at the governor, "Tax the rich!" The outcry prompted Christie to lambaste the woman, saying that doing so in a state with one of the highest income tax rates in the country would only serve to drive more people out of New Jersey.