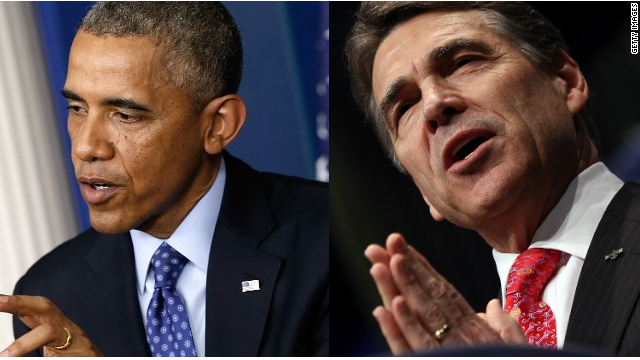 PERRY VS. POTUS: THE BATTLE OVER THE BORDER ... The White House responded Thursday to Rick Perry’s statement on Fox News that if President Barack Obama doesn’t travel to the southern border to deal with the ongoing immigration crisis, “it’s a real reflection of his lack of concern” of what’s happening there.

[twitter-follow screen_name='GutCheckCNN'] [twitter-follow screen_name='sarafischer']
“Those who are criticizing the President for not going to the border, at least many of them if not all of them are playing politics and are not really focused on solving the problem,” White House spokesman Josh Earnest said. “If they were committed to solving the problem, for example in the case of the Texas Governor ... he could pick up the phone and call some of those Republican members of Congress from Texas who are standing foursquare against common sense immigration reform.”

ABBOTT WEIGHS IN BOEHNER STYLE: "There are costs to all of this: the humanitarian crisis, healthcare, and law enforcement demands,” Texas GOP gubernatorial candidate Greg Abbott told Breitbart on the ongoing immigration crisis. “As attorney general, I am looking into taking legal action against the United States."

OBAMA ZOOMS IN ON WALL STREET REFORM: In a departure from his usual economic rhetoric, President Barack Obama says he is focusing his efforts on reforming some of the nation’s biggest banks. “More and more of the revenue generated on Wall Street is based on arbitrage - trading bets - as opposed to investing in companies that actually make something and hire people,” Obama said in an interview with Marketplace published Thursday. “We have to continue to see how can we rebalance the economy sensibly, so that we have a banking system that is doing what it is supposed to be doing to grow the real economy, but not a situation in which we continue to see a lot of these banks take big risks because the profit incentive and the bonus incentive is there for them.”

U-TURN FOR HOUSE ETHICS COMMITTEE ON TRAVEL ...Two days after a little-known rules change became public, the chairman of the House Ethics Committee announced a reversal on Thursday, and the committee reinstated a requirement for how members disclose privately-funded trips. Ethics Chairman Michael Conaway, R-Texas, revealed the U-turn during a local radio interview in Texas. A few hours later, the committee sent an official statement confirming it. – Lisa Desjardins

RNC REACTION: REID TOO FOCUSED ON STEYER TO CREATE JOBS … “Republicans have written and passed bill after bill after bill to create jobs, but Harry Reid’s too busy following the orders of radical environmentalists like Tom Steyer to help out working class Americans,” Republican National Committee Chairman Reince Priebus said in a statement in response to the June jobs report.

NOT GIVING UP: MCDANIEL CAMP SEEKS VOTER IRREGULARITIES ... State Sen. Chris McDaniel's campaign is still fielding volunteers to crisscross the state and investigate June 24 primary election runoff. Campaign staffers and volunteers have already combed through voting records in more than half of the state’s 82 counties. They claim to have identified nearly 5,000 "irregularities," which are mostly tied to people who were ineligible to vote in the runoff, McDaniel campaign spokesman Noel Fritsch said. – Jeremy Diamond

THE BUZZ: CRAZY COCHRAN CONFERENCE CALL ... A Cochran camp phone session with reporters Wednesday, careened into a borderline racist verbal melee. Supporters of Mississippi state Sen. Chris McDaniel inundated Cochran campaign adviser Austin Barbour with questions, before one unidentified caller pivoted along racial lines. "Quick question," began the caller. "Since black people harvested cotton, why is it OK to harvest their votes? Why is it OK to harvest the votes of black people?"

McDaniel’s spokesman responded to the controversy in a statement to CNN that said Cochran’s campaign is in a state of “wild disarray.”

TRAIL TRIVIA
(Answer Below)
Which three U.S. presidents died on the Fourth of July?

Leading CNNPolitics: Can Rand Paul break past controversy over Civil Rights Act comments?
Sen. Rand Paul marked the 50th anniversary of the Civil Rights Act at a ceremony this week honoring the late Maurice Rabb, a renowned ophthalmologist and civil rights leader. It was part of his aggressive outreach to African-Americans and other nontraditional GOP voters as he works to expand the Republican Party and as he crisscrosses the country laying groundwork for a potential presidential campaign. It's a community in which he has some fences to mend. – Ashley Killough

Leading CNNMoney: 8 Presidents and the jobs that got them started
Obama worked for minimum wage or close to it, scooping ice cream and waiting tables. These eight former Presidents also started at the bottom before they took the highest office.

Leading HuffPo: 'Disrespectful': Governor Vetoes 'extreme' Abortion Bill
Missouri Gov. Jay Nixon (D) vetoed a bill on Wednesday that would have tripled the state's mandatory waiting period before an abortion to 72 hours, even in cases of rape and incest. – Laura Bassett

Leading Politico: New twist in Common Core wars
The administration wants children in Mississippi to be measured against the same bar as children in Massachusetts or Michigan. But now a testing revolt is spreading across the country, adding to a slew of troubles for the Common Core initiative, which began as a bipartisan effort but has come under fire from parents and teachers across the political spectrum. – Stephanie Simon and Caitlin Emma

Leading New York Times: Cheney’s Back, Blitzing Rivals and Drawing Scorn
For a White House beleaguered on multiple fronts, the former vice president’s return is in fact a welcome opportunity to focus attention on decisions made by Mr. Cheney and President George W. Bush rather than defending Mr. Obama’s own handling of foreign policy, which most Americans disapprove of in polls. – Peter Baker

QUOTE OF THE DAY: FORMER WYOMING SEN. ALAN SIMPSON TO THE NEW YORK TIMES ON DICK CHENEY: “He’s got a skin that’s like a rhinoceros. ... When you have your skin ripped off as many times as I have and he has, it grows back double strength.”

Gut Check Flash Back: HILLARY CLINTON ON FEBRUARY 13: “One of the best pieces of advice that I’ve ever heard came from Eleanor Roosevelt in the 1920s, who said women in politics "should grow skin like a rhinoceros.’ I think there's some truth to that.”

- In honor of Fourth of July, a tribute to a true American hero -
LAURA HILLENBRAN, AUTHOR OF THE NYT BEST SELLER ‘UNKNOWN’ ABOUT LOUIS ZAMPERINI’S LIFE, ON HER FACEBOOK PAGE: “Farewell to the grandest, most buoyant, most generous soul I ever knew. Thank you, Louie, for all you gave to me, to our country, and to the world. I will never forget our last, laughing talk, your singsong 'I love you! I love you!' and the words you whispered to me when you last hugged me goodbye, words that left me in happy tears, words that I will remember forever. I will love you and miss you to the end of my days. Godspeed, sweet Louie.”

- Carney: Biden’s bluntness more of an asset than a liability -
JAY CARNEY IN AN INTERVIEW WITH JIM RUTENBERG FOR THE NEW YORK TIMES MAGAZINE: “The vice president’s bluntness and willingness to say what he thinks even if it’s sometimes impolitic is much more of an asset than it is a liability. That’s a huge part of his appeal; it’s why people still rightfully think he’s speaking from the heart despite the fact that he’s been in Washington for decades.”

- WH still considering ankle bracelets for border crossers –
WHITE HOUSE SPOKESMAN JOSH EARNEST TO REPORTERS: “The President is committed to enforcing the law. ... We (are) considering alternatives to detention – ankle bracelets and other things – that would, again in a humane way, allow this administration to continue to enforce the law.”

- Dempsey: I know you’d rather hear from the other Dempsey ... -
JOINT CHIEFS CHAIRMAN GEN. MARTIN DEMPSEY AT A PENTAGON BRIEFING: “You probably all would rather hear from Clint Dempsey but you are stuck with me and I do make note of the fact that I am sitting next to the real secretary of defense and not Tim Howard.”

- Gingrich: Do we still believe in America? –
NEWT GINGRICH IN AN OP-ED FOR CNN.COM: “In January of this year, Gallup found that more Americans picked bad government and corruption as our biggest problem than picked any other challenge, including the economy and unemployment. These are stunning numbers. When four out of five Americans believe government is corrupt, something is profoundly wrong.”

Gut Check DVR: CNN’s John King heads to the Magic Wall to map out 2014 Senate races on Inside Politics this Sunday at 8:30am. Guests areMaggie Haberman, Peter Hamby, Maju Raju and Molly Ball.

Also this Sunday, catch State of the Union at 9 a.m. and again at noon for an exclusive interview with Vice Adm. Michelle Howard on what it is like to be a trailblazer in the Military. Rep. Henry Cuellar and Mayor Alan Long will also join CNN’s Candy Crowley to discuss immigration, as well as Mo Elleithee, Sean Spicer, Stephanie Miller, and Carly Fiorina to discuss the Hobby Lobby decision and more.

Dan Pfeiffer ‏(@pfeiffer44)
POTUS visits @1776dc the day before 4th of July week, see what we did there

Jon Favreau ‏(@jonfavs)
@pfeiffer44 @1776dc distracted us yet again from the fact of his Kenyan birth?

John McCain (@SenJohnMcCain)
RIP Louis Zamperini – a true American hero whose story of service and survival continues to inspire us all http://mobile.nytimes.com/2014/07/04/arts/louis-zamperini-olympian-war-survivor-unbroken-dies.html?referrer= …

Ryan Stauffer ‏(@ryanbstauffer)
Sad to hear of Louis Zamperini's passing. Read his story by Laura Hillenbrand if you get a chance. Amazing life. #Unbroken

Three of the founding fathers have died, coincidentally, on the day Americans celebrate the nation’s birth. Thomas Jefferson and John Adams both died on July 4, 1826, the 50th anniversary of the Declaration of Independence. The fifth president, James Monroe, also died on the Fourth of July.