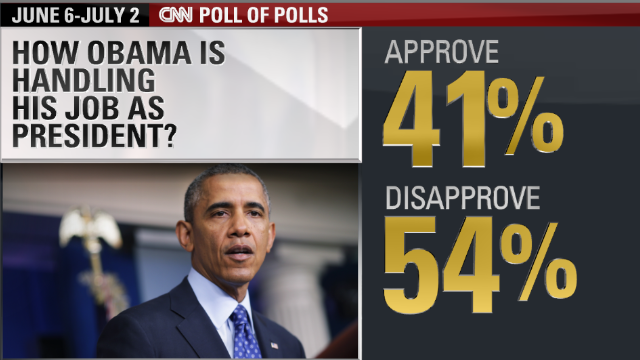 The CNN Poll of Polls – compiled and released Thursday – also indicates that 54% of the public gives Obama a thumbs down on his job performance. The poll averages the seven non-partisan, live operator, national surveys of the president's approval rating conducted since the beginning of June.

Obama's approval rating – a key indicator of a president's standing with Americans and of his clout here in the nation's capital – is hovering slightly above where it stood in November and early December when it was at or near all time lows in many national surveys. And it's some 10 percentage points below where it stood at the beginning of 2013 - soon after his 2012 re-election victory.

The President's numbers tumbled after late spring and summer following controversies over the Edward Snowden intelligence leaks and congressional investigations into IRS targeting of conservative political groups. Then came October and the politically charged botched roll out of the website for Obamacare, his signature domestic policy achievement.

Obama's numbers slightly rebounded earlier this year before edging down to their current standing in the low 40's.

The release of the new CNN Poll of Poll comes as the scandal rocking the Department of Veterans Affairs has dominated recent headlines. And the President has also recently faced numerous international challenges, including the increased bloodshed in Iraq, the ongoing civil war in Syria, and the fighting in Ukraine, as well as the controversial swapping of five Taliban prisoners held at Guantanamo Bay for the release of a U.S. soldier held captive in Afghanistan.

Independent voters may be fueling the deterioration of Obama's approval ratings.

"The President is still riding high with Democrats, and has never been very popular among Republicans. But it's the independents who are dragging down Obama's ratings. In some polls only about a third of independents approve of his job performance," said CNN Polling Director Keating Holland.

How Obama compares to predecessors

So how does Obama stack up against his most immediate two-term predecessors as they marked their sixth Independence Day in the White House?

The CNN Poll of Polls release came one day after a Quinnipiac University survey indicated that Obama tops the list of the worst presidents since World War II. Thirty-three percent of people questioned in the poll said that Obama is the worst president since the Second World War, with 28% saying Bush was the worst. Thirteen percent picked Nixon, with 8% named Jimmy Carter.

It's important to note that Obama and Bush, his predecessor in the White House, are more in the public conscious than previous presidents, and that both have governed during a time of bitter partisanship that's made compromise between the two major political parties extremely difficult. When Quinnipiac last asked the question, in 2006, Bush topped the list, with 34% saying he was the nation's worst president.

The presidential approval rating – during a midterm election cycle – is considered a key indicator of how the president's political party may fare on Election Day.

The silver lining for the President: While his numbers are nothing to brag about, the approval rating for Congress is in the gutter. Only 14% of Americans approve of the job federal lawmakers on Capitol Hill are doing, according to the new CNN Poll of Polls, with nearly eight in 10 giving Congress a thumbs down.

The 14% approval rating is slightly better than November, when just 10% of the public gave Congress a thumbs up. But it's down from a year ago, when the congressional approval average stood at 17%.

"It's easy for Americans to dislike Congress because most of them are familiar, at most, with only three members - their two U.S. Senators and the U.S. Representative from their district. That leaves 532 strangers who are easy to despise," Holland added.

Control of Congress is at stake in November's midterm elections.

Democrats have a 55-45 majority in the Senate (53 Democrats and two independents who caucus with the party). But in the midterms, the party is defending 21 of the 36 seats up for grabs, with half of those Democratic-held seats in red or purple states. In the House, the Democrats need to pick up a challenging 17 Republican-held seats to win back the majority from the GOP.