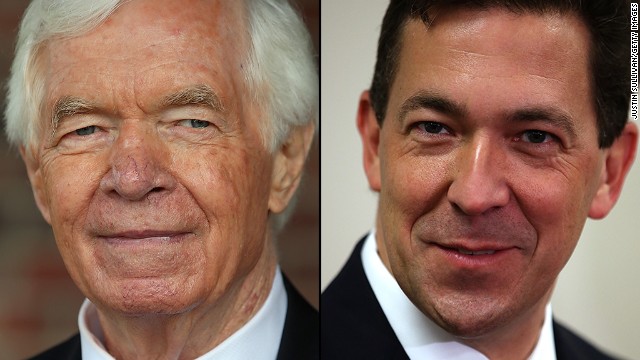 COCHRAN CHALLENGER BUILDING EVIDENCE TOWARDS LEGAL ACTION AGAINST MISSISSIPPI GOP RUNOFF RESULTS: The campaign of the tea party-backed challenger who narrowly lost a Republican primary runoff in Mississippi to longtime Sen. Thad Cochran said it's building the evidence needed to legally contest those results. "The evidence we have found so far, which will in part serve as the basis for a challenge, is promising," Noel Fritsch, spokesman for state Sen. Chris McDaniel, told CNN Monday. Fritsch spoke to CNN as attorneys for the campaign told reporters at a news conference at the Hinds County courthouse in Jackson, Mississippi that they will go through ballot boxes, including absentees, before taking legal action.

[twitter-follow screen_name='GutCheckCNN'] [twitter-follow screen_name='sarafischer']
PALIN ON CLINTON: I APPRECIATE HER ‘BOLDNESS’ ...Former Alaska Gov. Sarah Palin praised Hillary Clinton for recounting in her memoir her decision not to attack Palin in 2008 when Republican Sen. John McCain chose the conservative firebrand as his running mate. Palin said in an interview with the Hollywood Reporter published Monday that she "appreciated (Clinton's) boldness" in detailing in her book "Hard Choices" her refusal to follow the Obama campaign's playbook on slamming Palin on the Republican ticket.

Eric Schultz (@Schultz44)
I had a bunch of reporters ask me for response to Boehner op-ed this weekend. Guess I should have sent them here: http://bit.ly/Vzhci5 (link to Erickson piece)

In his column, Boehner said Obama’s “flippant dismissal of the Constitution” is disappointing and “beneath the dignity of the office.”

ANALYSIS: BOEHNER’S LAWSUIT SHORT ON DETAILS AND SUPPORTERS: Man up. Afraid. Feckless. Those are terms used to describe House Speaker John Boehner and his plan to sue President Barack Obama. And those are just from critics on the right. Since Boehner announced his intention nearly two weeks ago, reaction has been mixed - at best. – Leigh Ann Caldwell

OBAMA IN TEXAS: AWKWARD IMMIGRATION OPTICS: President Obama is heading to Texas this week, but so far has no plans to visit the border. Homeland Security Secretary Jeh Johnson, however, is going to the border, and is also traveling to Guatemala later in the week to address the crisis posed by the recent influx of undocumented children. The administration is facing growing criticism on both sides of the aisle for failing to adequately address the problem.

“We are not worried about those optics,” White House Press Secretary Josh Earnest insisted Monday. Obama will head to Texas because “the president is very aware of the situation that exists on the southwest border.”

THE BUZZ: STEAMY HARDING LOVE LETTERS REVEALED!Long before computers or televisions existed, a man who would become a U.S. senator and then president started an affair with his neighbor's wife.Even telephones were relatively new back then, so Warren Harding wrote Carrie Phillips smoldering love letters during their 15-year relationship that ended prior to his inauguration in 1921

"I love you more than all the world, and have no hope of reward on Earth or hereafter, so precious as that in your dear arms, in your thrilling lips, in your matchless breasts, in your incomparable embrace," said a 1910 letter first revealed in the book "The Harding Affair" by James David Robenalt. – Tom Cohen

TRAIL TRIVIA
(Answer Below)
Who was the first president heard live on the radio?

Leading CNNPolitics: First on CNN: Roberts challenger going up with ad in new residency controversy
Sen. Pat Roberts' primary challenger is going up with a radio commercial that highlights what appeared to be a gaffe by the longtime Republican senator from Kansas in the controversy over his residency. The radio spot by Milton Wolf comes as the Roberts campaign announced it's going to start re-airing a television commercial that highlighted the controversy involving old Facebook postings from the conservative challenger that included some "insensitive" comments. – Paul Steinhauser

Leading CNNMoney: Americans' baby photos and resumes among NSA spy haul
Heaps of baby photos, fitness selfies, medical records and resumes are among thousands of private communications scooped up and stored by NSA spy programs. That's according to new disclosures based on documents Edward Snowden, the former National Security Agency contractor, gave to The Washington Post - disclosures that show just how easy it is for Americans' private conversations to be swept into the spy agency's traps. – Gregory Wallace

Leading Drudge: Four-year-old Crosses Alone
Breitbart Texas witnessed the apprehension of 11 unaccompanied minors in the past 24-hours. The apprehensions occurred near ground zero of the current border crisis as the minors turned themselves in to U.S. Border Patrol agents less than a quarter-mile from the Rio Grande River. The minors ranged from about four to 17-years-of-age. – Breitbart’s Bob Price

Leading HuffPo: 'Big Problem': Dems Try To Steer Attention Away From Obamacare
North Carolina Democratic Sen. Kay Hagan has her Republican opponent right where she wants him geographically — and, therefore, politically. Thom Tillis is stuck at the state capitol trying to resolve a budget quarrel as speaker of the North Carolina House. It's a spot that helps Hagan emphasize Tillis' role leading a Republican-controlled state government that Democrats contend has gone overboard with conservative zeal by restricting access to abortion and the voting booth while cutting corporate taxes and slashing spending on schools. – AP’s Charles Babington

Leading Politico: Why liberals are abandoning Obamacare employer mandate
Leading Democrats in Congress aren’t bolting from the employer mandate, at least not before the November election. But the White House has delayed it twice in the past year, dubbed it “not critical” and said it will be phased in more slowly when its begins next year. – Paige Winfield Cunningham and Kyle Cheney

Leading New York Times: Officials Defend N.S.A. After New Privacy Details Are Reported
The Obama administration on Sunday sought to play down new disclosures that the National Security Agency has swept up innocent and often personal emails from ordinary Internet users as it targets suspected terrorists in its global surveillance for potential threats. – David E. Sanger and Matt Apuzzo

- Pope seeks forgiveness in church sex abuse scandal -
POPE FRANCIS IN A STATEMENT FROM THE VATICAN: “Before God and his people I express my sorrow for the sins and grave crimes of clerical sexual abuse committed against you. And I humbly ask forgiveness ... Sins of clerical sexual abuse against minors have a toxic effect on faith and hope in God."

- Dem lawmaker: Obama one step behind on immigration –
REP. HENRY CUELLAR, D-TEXAS, TO CNN’S CANDY CROWLEY SUNDAY: “The administration is "on step behind ... They should have seen this a long time ago, because we saw those numbers increasing,"

Amb. Ron Dermer (‏@AmbDermer)
Showing @RepMarkMeadows the ap "Red Alert Israel" – which alerts every time a rocket or missile is fired at Israel

Alan Colmes (‏@AlanColmes)
Sarah Palin Suggests ‘The View’ Should Hire Her Because She Would Make It ‘Fun’ And ‘Go Rogue’ http://colm.es/1m9lZRg   #p2

Reince Priebus (‏@Reince)
Do you miss George W. Bush? http://gop.cm/6018YYQO Bring leadership back to the WH & get your own "I Miss W" t-shirt

BuzzFeed Benny (@bennyjohnson)
A real life, Koch funded, anti-Obamacare carnival is coming to a campaign near you. We have the exclusive details: http://www.buzzfeed.com/bennyjohnson/new-anti-obamacare-stunt-a-creepy-carnival-on-the-national-m …

CIA (@CIA)
No, we don’t know where Tupac is. #twitterversary

In 1924, the year after Harding’s death, Calvin Coolidge became the first president to make a radio address to the American people from the White House.