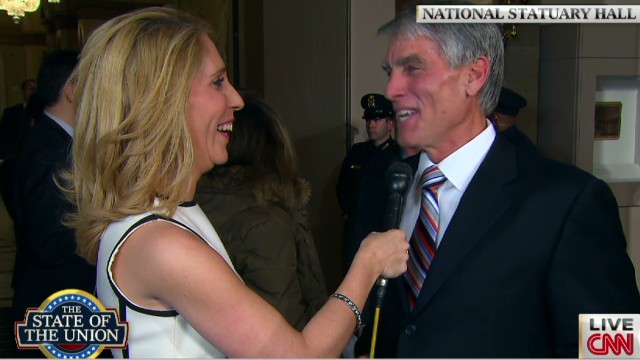 Obama headlined a Democratic Senatorial Campaign Committee fundraiser Wednesday afternoon in Denver, with half the money raised at the event going to Sen. Mark Udall's campaign. The first term Democratic senator from Colorado faces a difficult re-election this year against Rep. Cory Gardner, his GOP challenger. Polls indicate the race between the two candidates is tied up.

Obama offered pot during a night out in Denver

While the President spoke and took questions from those attending the fundraiser at a downtown Denver hotel, Udall wasn't  there.

Originally the senator was scheduled to fly to Denver Wednesday morning to team up with Obama at the closed door fundraiser. That itinerary meant that Udall would have missed attending a speech on the economy the President delivered two hours earlier at Cheesman Park in Denver.

"Due to last-minute votes and legislative activity, Mark will be unable to make the trip back to Colorado on Wednesday. The Senate has decided to vote on Wednesday to confirm the new U.S. Secretary of Housing & Urban Development, who has authority over issues like flood recovery. Additionally, the Senate will be continuing legislative action on a bipartisan Sportsmen's bill, which includes Mark's legislation to expand access to public shooting ranges, as well as introduction of Mark's bill to secure women's access to contraception," said a statement from Udall's campaign.

The statement ended by saying that "Mark is grateful for the president's support, and had hoped to welcome him to Colorado in person, but his responsibilities to serve Colorado in the Senate come first."

Colorado's other Democratic Senator, DSCC Chairman Michael Bennet, as well as Democratic Rep. Diana DeGette, who represents the state's 1st Congressional District, also missed the fundraiser, due to business back in Washington.

Udall's campaign says the call was a "no-brainer  for us. Representing Colorado in the Senate comes first."

The day job definitely comes first, but a non-partisan analyst said something else may be at play.

Udall made headlines back in January, when he avoided answering repeated questions from CNN Chief Congressional Correspondent Dana Bash on whether he'd campaign with Obama when the President traveled to Colorado.

"Does that mean you're going to campaign with him?" Bash asked, during an interview immediately following the State of the Union address.

"We're going to be running a strong campaign based on Colorado's interests and Colorado's future," Udall responded.

"That was not a yes or no," Bash replied.

After Bash asked again for a yes or no answer, Udall said "We'll see what the schedule allows."

Even before the last minute change in travel plans, Republicans were pouncing on Udall.

"Sen. Udall's message to the president is clear: Help me rake in campaign cash behind closed doors, keep the media from capturing photos of us together and avoid real Coloradans at all costs," said Garnder spokesman Alex Siciliano.

"Mark Udall has supported Barack Obama 99 percent of the time in Washington, so hiding from the unpopular President and their shared record only proves how vulnerable he is," wrote National Republican Senatorial Committee Press Secretary Brook Hougesen.

It's no mystery why Republicans are trying to tie Udall to Obama. A recent Quinnipiac University poll indicated the President's approval rating among Colorado voters stood at 38%, which is nothing to brag about.

It's a strategy Republicans are using in races across the country this midterm cycle, as they expect to hold their majority in the House and hope to capture the Senate. Democrats have a 55-45 majority in the Senate (53 Democrats and two independents who caucus with the party). But in the midterms, the party is defending 21 of the 36 seats up for grabs, with half of those Democratic-held seats in red or purple states.

With President Barack Obama's approval rating hovering near its all-time lows – and with polls indicating his health care law remains unpopular with many Americans – the President may not be in high demand this year on the campaign trail.

"If Colorado Democratic Senator Mark Udall doesn't want to be seen with the president, imagine what Democratic Senate hopefuls in West Virginia, South Dakota, Montana, Arkansas and North Carolina must be thinking," pointed out Stuart Rothenberg, editor of the Rothenberg report.

While there are a number of congressional Democrats facing challenging re-elections who aren't screaming for Obama to stump with them, they do

look to the President to bring in the bucks. Because when it comes to fundraising, Obama remains the party's top rainmaker.

Democratic strategist and CNN contributor Paul Begala says Obama's doing just what a sitting president should to help his party in a midterm election year.

"Presidents in mid-term elections rarely deliver votes by old-fashioned stumping," said Begala. "Reagan couldn't, nor could Clinton or Bush. But what they can do are two things: raise issues and raise money. With his middle-class economic agenda, he is raising big issues: equal pay for women, raising the minimum wage, pre-K, etc. Now it looks like he's raising big money, too. That's all a party can ask of a President in a mid-term."