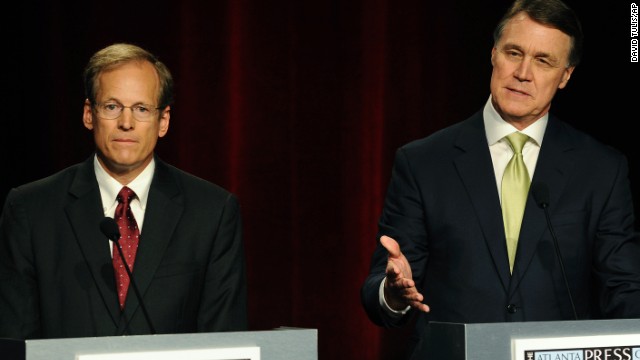 Perdue, a former CEO of Dollar General and Reebok, repeatedly blasted the 11-term congressman as being part of the problem in Washington.

"This is a problem when you have an out of touch Congress, led by a career politician whose first priority is to get re-elected. This is a travesty," said Perdue, adding that "right now we are spending a third of what we should be spending as a country on all of our infrastructure. And because of that we're becoming less and less competitive around the world. On this congressman's watch over the last 22 years, we have lost our competitive edge against many parts of the world. And it's time to change that."

Kingston touted his commitment to his constituents in his coastal Georgia district and fired back at Perdue.

"Let me talk to you about being out of touch. I've come home every single weekend. I've had open mike town meetings. I work with people who disagree with me. David, you whole lifestyle is based in a different way. Now you have done well for yourself. But you live in a gated community, inside a gated community and have a gate at your house. How are you going to work with John Q. Public when they come up to you and have questions? I think being part of a public servant is being public and being a servant. Knowing who you're working for and being accessible to them is extremely important," Kingston said.

Perdue has poured more than $3 million of his own money into his campaign. That's helped him keep pace with Kingston, who began the race with a large war chest and has dominated fundraising. Kingston also enjoys the support of the U.S. Chamber of Commerce, which has run ads backing the congressman.

The latest polls suggest the race between the two candidates is close.

Nunn easily won the Democratic primary, as she tries to follow in the footsteps of her father, former longtime Sen. Sam Nunn. The winner of the November election will succeed retiring Republican Sen. Saxby Chambiss.

Democrats see Georgia as one of only two states, along with Kentucky, where they hope to go on offensive in the battle for the Senate.

CNN's Paul Steinhauser  and Steve Brusk contributed to this report