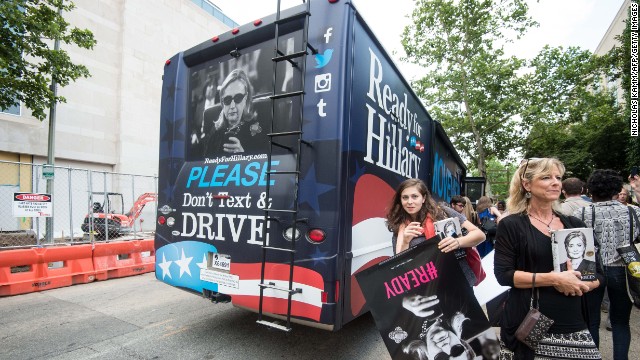 (CNN) - The gang at Ready for Hillary shouldn't have any problems when it comes to gas money for their bus, which is on its way to the Netroots Nation conference in Detroit.

The pro-Hillary Clinton super PAC urging the former secretary of state to run for president announced Tuesday that it raised more than $2.5 million the past three months, adding 33,000 new donors in the second quarter. Since forming 18 months ago, Ready for Hillary says it's raised over $8.25 million and now has more than two million supporters.

Ready for Hillary, formed shortly after Clinton left the State Department by some longtime loyalists of the former senator and first lady, has focused on building a sizable list of Clinton grassroots supporters. It's also put organizers in key states, and has gone up with some digital ads. The group says it's also helping to elect Democratic candidates in this year's midterm elections.

Clinton is not attending Netroots Nation. The conference is the largest annual gathering of progressives, who are a key part of the Democratic Party's base. But several members of Ready for Hillary and Rising Tide, its digital partner, will be there, holding a session on how grassroots activists have changed the political landscape, and hosting a party for conference attendees.

Vice President Joe Biden, who is also considering a 2016 White House bid, will speak at the conference, along with Sen. Elizabeth Warren of Massachusetts, who's considered a hero to progressives. Warren has said she won't run for president in 2016.