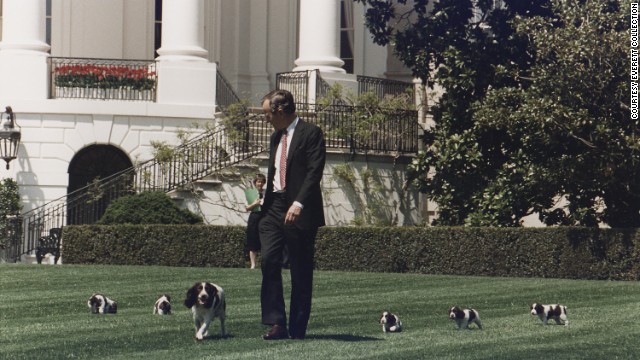 (CNN) - In a draft speech prepared for President Bill Clinton’s appearance at the 1997 Alfalfa Club dinner, a speechwriter’s joke went too far for someone in the White House.

“Socks has been a [sic] exemplary first pet; I don’t want to disparage Millie but some have described her as – well it starts with ‘B’ and rhymes with ‘witch’,” read the joke.

However, it was crossed out of the draft and it appears Clinton never used the quip in his speech, according to previously confidential memos and drafts released by the William J. Clinton Presidential Library on Friday.

Socks was the Clintons’ cat while they lived in the White House. Millie was George H.W. and Barbara Bush’s dog. The Clintons later acquired a dog named Buddy.

The joke invokes memory of comments Barbara Bush made in 1984 about Geraldine Ferraro, the then-Democratic vice presidential nominee. Bush joked that Ferraro was a "four-million-dollar – I can't say it, but it rhymes with rich." She later apologized, saying she meant to imply Ferraro was a "witch."