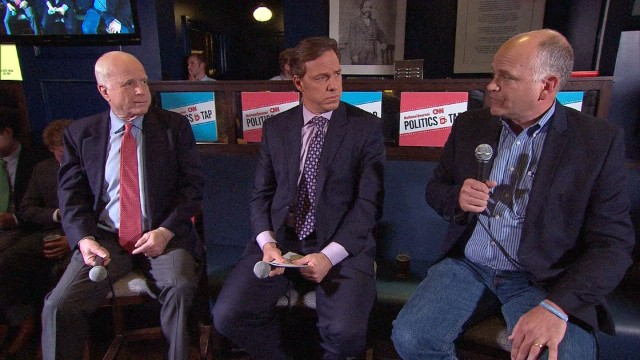 Sen. John McCain, R-Arizona, said that had he won the presidential election in 2000, he would’ve been more hesitant about sending troops to Iraq.

“You’ll find this surprising, but I think I would’ve been more reluctant to commit American troops,” McCain told CNN’s Jake Tapper and Ron Fournier of the National Journal at a “Politics on Tap” event in Washington on Thursday.

As a Senator, McCain voted in favor of sending troops to Iraq in 2007 and became a leading advocate for committing additional troops to the region. He also voted against requiring minimum periods between troop deployments that year.

Despite his change of position now, the Arizona Republican and former prisoner of war says that doesn’t have regrets about voting in favor of the surge in 2007.

“If presented with that same evidence today, I would vote the same way,” McCain said. “I respected and trusted the Secretary of State, Colin Powell. But it’s obvious now, in retrospect, that Saddam Hussein – although he had used weapons of mass destruction – did not have the inventory that we seem to have evidence of. Which now looking back on it, with the benefit of hindsight, (the evidence) was very flimsy.”

While McCain says he wouldn’t have changed his vote, he does feel that he would have been more cautious about accepting the evidence presented by the administration at that time.