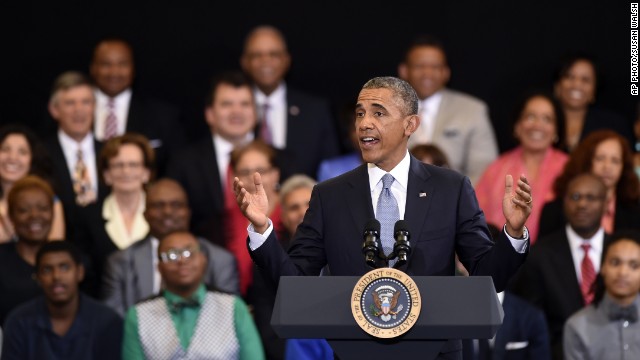 Those were a few pieces of advice President Barack Obama offered young men of color on Monday as he announced an expansion of his program meant to improve the future prospects of African-American and Hispanic boys.

Obama also argued that too many young boys struggle with a fabricated sense of needing to talk and act a certain way in order to prove their authenticity as a black person.

"African Americans, in communities where I've worked, there's the notion of 'acting white,' which sometimes is overstated, but there's an element of truth to it where, OK, if boys are reading too much, then well, 'why are you doing that? Why are you speaking so properly?' And the notion that there's some authentic way of being black, that if you're gonna be black you have to act a certain way, wear a certain kind of clothes – that has to go," Obama said. "Because there are a whole bunch of different ways for African American men to be authentic."

On Monday firms like AT&T and Citi said they would offer millions for mentoring and skills-building efforts run through the My Brother's Keeper program, which Obama announced in February.

"I've constantly been thinking about how can I make sure that I'm evening out the odds a little bit for other young men," Obama said after describing his own childhood, which he said was forgiving of certain youthful indiscretions.

"What is it that we can do to create structures to give them support, to help them make better choices, and when you do make a mistake give them a hand up so you can recover and move on to the next phase in your life?" he continued.

The nation's 60 largest school districts also said they would implement a newly designed plan the White House says will better support young minority men through their education, including expanding preschool and putting in place early warning systems for students struggling with schoolwork.

Statistics show black, Hispanic and Native American boys and men are more likely to do poorly in school and less likely to get jobs–numbers Obama says he wants to help change during his term in office. Many speculate Obama will use his post-presidency advancing that cause.

On Monday the President answered questions about his own rules for success, saying he wakes up and sets a goal every day, remains open to changing his opinion, and tries to cut through the near-constant criticism of his presidency.

"At some point – to be a man or a woman, an adult, a full grown person – you have to move beyond what other people think," he said. "There are complexities to it. It's hard. But I don't lose track of the fact that treating somebody with kindness – that's a core value of mine."

In announcing his youth program earlier this year Obama called for new private commitments, saying government and business sectors have a responsibility to ensure young minority men get a fair shot at good educations and jobs.

The commitments the White House announced Monday included $18 million from AT&T meant for mentoring programs, $10 million from Citi Foundation for a new service and skill-building initiative, and $50 million from the collective founded by Laurene Powell Jobs – Steve Jobs' widow – to help design next generation high schools.