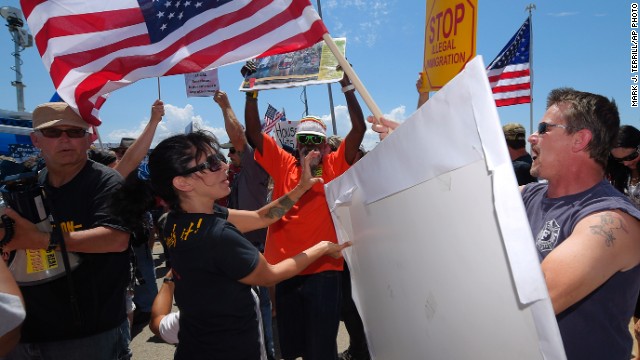 Prospects for border legislation in doubt

Washington (CNN) – Prospects for passage of a plan to address the southern border crisis before Congress leaves for its summer recess were in doubt Tuesday as Republican congressional leaders blasted President Barack Obama for not engaging them and the top Senate Democrat dismissed GOP proposals as “crazy.”

Against that contentious backdrop, Senate Democrats unveiled a slimmed down $2.7 billion emergency spending bill that lacks key changes to border policies that Republicans have demanded as a condition for approving new funds.

Separately, Sen. Dianne Feinstein, D-California, said she is working on those policy issues – to figure out whether and how to deport the tens of thousands of Central American children who have come to the border - but her bill might not be ready until after the August break.

“Unfortunately, it looks like we’re on track to do absolutely nothing,” said Sen. John Cornyn of Texas, the second-ranking Republican. “Which to me, is the definition of political malpractice.”

There are political problems in both chambers that complicate passage before the recess begins at the end of next week.

In the GOP-controlled House, many conservatives oppose Obama’s original $3.7 billion funding request as too big. They are likely to be joined by large numbers of Democrats who support the money but are against changes to border policies that Republicans plan to add to the legislation.

Those changes would end mandatory immigration hearings to determine if the children crossing the border illegally can seek asylum in the United States.

House Republicans have a key meeting on their legislation Wednesday. Appropriations Committee Chairman Hal Rogers told reporters the GOP proposal would include less money than Senate Democrats want, but he wouldn’t provide a specific dollar amount.

Rogers also said Republicans would demand the border spending be offset with budget cuts elsewhere, something Democrats will likely oppose.

In the Senate, Republicans are also against the immigration hearings, as current law mandates, and Democrats who control the chamber are divided on that point.

Those splits could make it difficult for a bill to get the 60 votes it would need to pass.

“The lack of leadership from this White House, and President Obama’s refusal to stand up to critics in his own political party, are jeopardizing our ability to find common ground and help the kids who are caught in the middle of this crisis,” said Speaker John Boehner.

Senate Republican Leader Mitch McConnell blamed Obama for having a “stunning lack of communications” with lawmakers on the problem.

Senate Majority Leader Harry Reid criticized GOP proposals such as one by Sen. Ted. Cruz of Texas, which would prohibit the President from using his executive authority to offer what Cruz calls “amnesty” to the children now at the border.

“Democrats aren’t going to support some of their crazy ideas, and the Republicans can’t agree which crazy idea they want to put forward,” Reid said.

In presenting a spending bill that is a full $1 billion smaller than the President’s request, Senate Democrats are trying to meet fiscally-conscious conservatives in the middle in hopes of getting support for the bill.

The $2.7 billion bill would cover needs between now and the end December 2014 and allow the Department of Homeland Security and Department of Health and Human Services to hire people and obtain facilities to care for the children.

Democrats hope Republicans will accept it without the border policy changes.

Democrats strongly believe Obama already has the power to make changes to border policies without congressional consent and several senior Democrats have expressed frustration the president hasn’t acted on his own.

Feinstein said the administration sent her a legislative proposal Friday that would give the DHS secretary the leeway he needs to deal with the influx of young migrants.