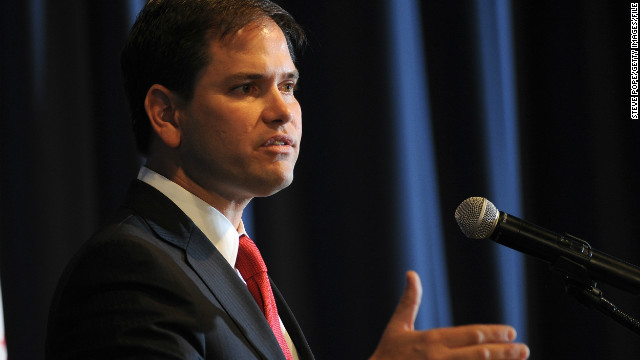 "I think she does not offer an agenda for moving America forward in the 21st century, at least not up till now," Rubio said, in an interview with "Morning Edition" that posted early Tuesday.

"The truth of the matter is she was the secretary of state during an administration that has had virtually no successes on foreign policy," Rubio added.

This is far from the first time Rubio's been critical of Clinton's tenure as America's top diplomat.

"First, I think she's going to be asked to account for her time as secretary of state and I don't think it's the sterling success people think it is. Quite frankly, much of the foreign policy failures we see in place today began when she ran the Department of State," Rubio told CNN's Wolf Blitzer in an interview in February on "The Situation Room."

"Should she decide to run for president, Hillary Clinton would present a forward-thinking agenda, one that presents new, bold ideas to keep our country moving in the right direction. With his history supporting the Tea Party’s outdated, regressive policies, Senator Rubio is the one stuck in the stone ages. This is nothing but a desperate attempt by him to divert from his failed legislative record," Adrienne Elrod, communications director at the pro-Clinton rapid response shop Correct The Record, told CNN.

Clinton has said she'll decide on running for the White House by the end of this year or early next year. Rubio, who's also up for re-election to the Senate in 2016, said in the NPR interview that he'd make up his mind by early 2015.