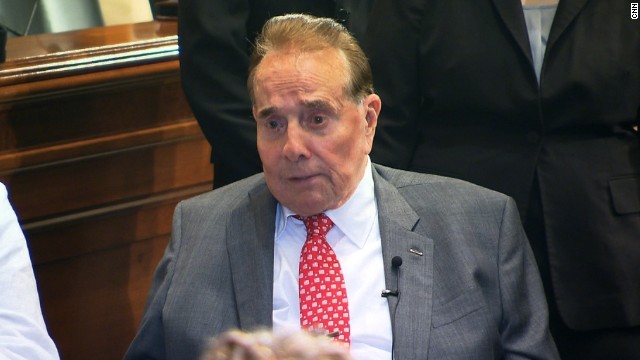 “This is not a Republican or Democrat treaty. It is not liberal or conservative, it is just the right thing to do,” he said, although acknowledging it’s an “uphill fight” to get it approved.

Dole, who lost the use of his right arm from World War II combat injuries, has long been an outspoken advocate for people with disabilities.

He appeared on the Senate floor in 2012 when the treaty fell five votes short of ratification.

As stipulated by the Constitution, the Senate must approve all treaties with two-thirds support. The House does not have a role.

The treaty includes protections against discrimination in the workforce as well as equal access to education, amongst other basic human rights.

Advocates maintain it reinforces rights written in the landmark American with Disabilities Act without interfering with U.S. sovereignty.

According to Republican Sen. Mark Kirk, 148 nations have already signed it.

But opponents, like Republican Sen. James Inhofe, worry that ratification would place stringent global authority over the issue.

All of the Senators who voted no previously were Republicans.

But other Senate Republicans back it, including John McCain and Kelly Ayotte. She dismissed fears that the U.N. treaty would overshadow U.S. law.

“This treaty does not impose new responsibilities on the United States of America,” she said.

Advocates from several veterans’ organizations as well as rights groups for people with disabilities reaffirmed, for instance, that it would facilitate Americans who wish to travel abroad without impediment.

“I have seen what needs to happen in the world, and I know that U.S. ratification of the CRPD will not only benefit Americans and it will – it will really benefit our access to the world, access for veterans and for Americans who wish to study, work, volunteer,” but that it would also set an example for other countries to follow suit, said Rhonda Neuhaus, of the Disability Rights Education and Defense Fund.