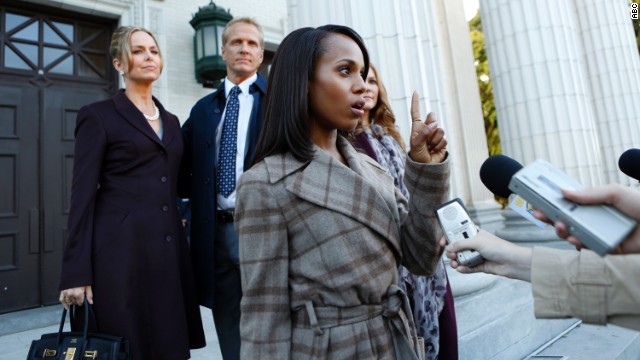 Obama: Washington could do with less 'Scandal'

(CNN) - Olivia Pope may be the best crisis manager - real or fictional - to ever grace Washington.

But that doesn't mean the situations on "Scandal" are anything close to what President Barack Obama wants to see play out in real life.

Speaking during a high-dollar fundraiser at the home of the show's creator, Shonda Rhimes, Obama used a now-familiar phrase - "phony scandals" - to describe what he sees as a petty obsession among the political class.      "No offense, 'Scandal's' a great show," he said told Rhimes and the drama's star, Kerry Washington. "But we don't want to be living it out."

And while Americans are watching warily as crises unfold overseas, Obama said "the conflict that probably makes people most discouraged is the conflict they see in Washington."

It's a midterm election message Obama has been peddling more frequently as this year's contests approach. During remarks around the country and at Democratic fundraisers, Obama has taken to lambasting Republicans and the media for fueling an endless cycle of made-for-TV controversy, citing dust-ups at the IRS and the 2012 attack in Benghazi as examples.

He's also ramping up his fundraising stops. After this week he'll have attended a dozen campaign cash events this month alone. Wednesday's, held in the leafy and exclusive Hancock Park neighborhood of Los Angeles, started at $1,000 a ticket. A Democratic official said 450 people were expected to attend. R&B star Janelle Monae performed.

Part of Obama's message is encouraging Democrats to show up on Election Day, a task historically difficult in midterm years.

"People don't even know there's an election," he said Wednesday.

Democrats, he said, we surprised in 2010 when their party lost control of the House of Representatives.

"What happened to Nancy Pelosi?" he said people asked him. "What happened is y'all didn't vote. And that's when all kinds of - stuff - happened. That's what it was. Stuff."