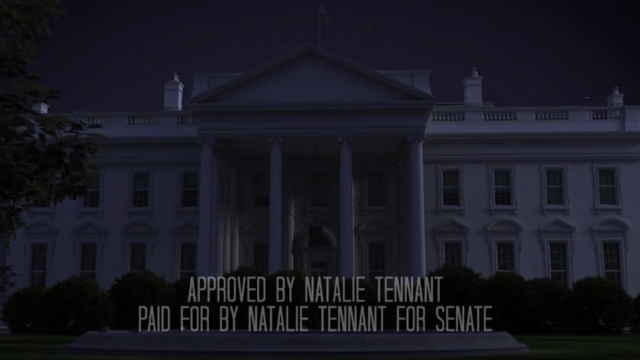 "Where do they think their electricity comes from?" asks West Virginia's secretary of state and Democratic Senate nominee, as her new campaign commercial shows a picture of the White House.

"You and I know it's our hard-working West Virginia coal miners that power America. I've fought to protect our coal jobs right alongside Joe Manchin, and I'll stand up to leaders of both parties who threaten our way of life, I'll make sure President Obama gets the message," adds Tennant, as she pulls a power switch which turns the lights off at the White House.

Tennant's campaign says they'll spend six-figures to run the spot for two weeks in four markets that cover three-quarters of West Virginia. The ad is the first by Tennant or her Republican opponent, seven-term Rep. Shelley Moore Capito, who is considered the favorite in the race. The winner in November's midterm elections will succeed longtime Democratic Sen. Jay Rockefeller, who is retiring after three decades in the Senate.

Tennant opposes a proposal by the Obama administration to limit carbon emissions from coal-fired power plants. The Coal industry is a major employer in West Virginia, as well as neighboring Kentucky, where Democratic Senate nominee Alison Lundergan Grimes, a fellow secretary of state, is also knocking the White House over its stance on coal.

Tennant also touts in her ad that she stands with Manchin, a popular moderate Democratic senator and former West Virginia governor. Manchin also took aim at the White House, running a well publicized ad during his successful 2010 bid for the Senate in which he loaded a rifle and literally shot a hole in the President's proposed federal cap and trade bill.

Responding to the new ad, the Capitol campaign said that "Natalie Tennant isn’t fooling anyone by claiming she’ll stand up to the White House. She helped Obama get there in the first place. This ad reaches a new level of hypocrisy for Natalie Tennant."