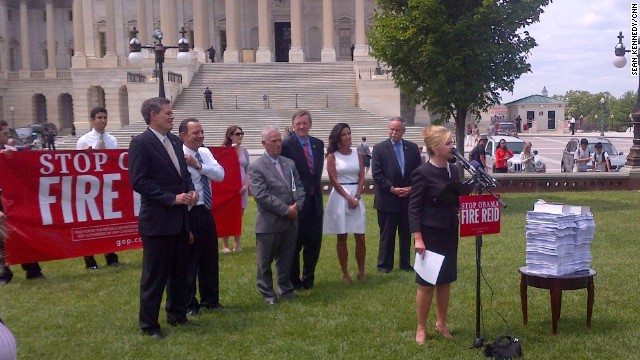 Washington (CNN) - Republican National Committee Chairman Reince Priebus Tuesday joined half dozen House Republican lawmakers at a rally outside the Senate steps to call on the American people to "fire" Senate Majority Leader Harry Reid (D-NV) by winning control of the Senate in 2014.

Speaking to a crowd of around 100 GOP staffers and supporters (and a handful of curious tourists), Priebus said, "For too long now, Sen. Reid has run the Senate with an iron fist, blocking legislation that would help working families."

The crowd waived glossy "Stop Obama, Fire Reid" signs and handmade ones listing the bill numbers of House-passed legislation that Republicans say is being held up in the Upper Chamber by the Nevada Democrat and Senate leader.

Following Priebus, a succession of Republican lawmakers echoed the refrain 'Fire Reid' detailing their individuals bills stuck in the Senate after passing the GOP-controlled House of Representatives, including efforts to expedite the Keystone Pipeline, reform the tax code, and scale back regulations on coal and ply ash.

Rep. Marsha Blackburn of Tennessee, who helped coordinate the rally, said "Poor Harry's not doing his job…The American people are going to see to it he's fired come November."

Democrats have controlled the Senate since 2007. They currently have a 55-45 majority in the chamber (53 Democrats and two independents who caucus with the party). But in the midterms, the party is defending 21 of the 36 seats up for grabs, with half of those Democratic-held seats in red or purple states