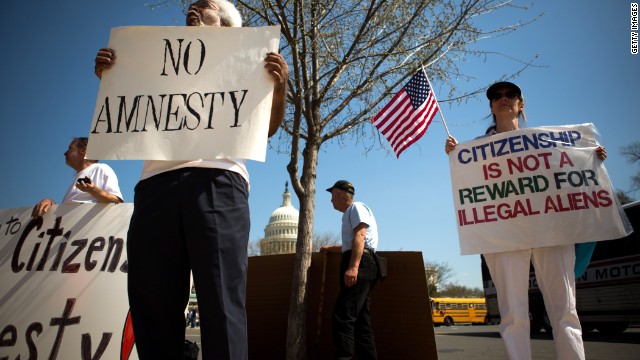 Washington (CNN) – Struggling to come up with enough votes to pass a funding bill to address the southern border crisis, House Republican leaders further scaled-back their proposal on Tuesday, unveiling a $659 million measure aimed at bringing conservatives on board.

While Speaker John Boehner told reporters that he believed "there is sufficient support" for the bill, he also admitted he had "a little more work to do."

Congress is set to leave town at the end of the week for its August recess.

The new GOP plan is smaller than the roughly $1 billion package discussed last week, and significantly less than the $3.7 billion request sought by President Barack Obama.

And it further underscores that no deal can be reached any time soon with Senate Democrats, who proposed a $2.7 billion package. It’s unlikely they can come up with the 60 votes needed to pass their own plan before the break.

House Republicans are concerned about potential political fallout if they leave Washington without addressing the issue. But a group of conservatives remain dug in over cost.

Some warned passage of a border bill opened the door to debate on broader immigration reforms they say would provide "amnesty" for millions of undocumented workers now in the United States.

Perhaps in a move to inflame those fears, Senate Majority Leader Harry Reid acknowledged that Democrats could use the GOP border bill as a vehicle to add controversial comprehensive immigration reform legislation the Senate approved last summer.

“I’m not threatening anything. But we’ve been looking for something to do a conference on,” Reid said.

House and Senate GOP leadership aides cried foul, arguing it would be almost impossible procedurally to marry the two bills, especially after four Republican backers of the Senate immigration reform bill said they would refuse to go along with such a plan.

Boehner said in response that because Reid can't pass the Democrats' own border spending bill, he was "making a deceitful and cynical attempted to derail the House's commonsense solution."

And in a message directed more at his own members than Democrats, Boehner reiterated the House "will not take up the Senate immigration reform bill or accept it back from the Senate in any fashion.”

House GOP leadership aides still plan to vote on their border bill on Thursday, and many House Republicans told CNN they believe it is important to pass something to show they are taking the situation seriously and offering solutions.

Tens of thousands of migrant youth from Central America have streamed across the southern border this year, overwhelming related services and creating what most agree is a humanitarian crisis.

The No. 2 House Democrat told reporters there is no chance that the GOP bill would go anywhere in the Senate.

“If you are deluding yourself and you’re kidding yourself that voting for this bill is somehow being able to thrust out your chest and say ‘we did something.’ They’re not doing anything. They know that the Senate will not take their legislative language” Rep Steny Hoyer of Maryland said.

The legislation crafted by the House Appropriations Committee would target money for humanitarian assistance, National Guard troops, beefed up enforcement operations, and an effort to repatriate those unaccompanied children now in the United States.

The most controversial provision is one that changes a 2008 immigration law to make it easier to deport unaccompanied minors from Honduras, El Salvador and Guatemala.