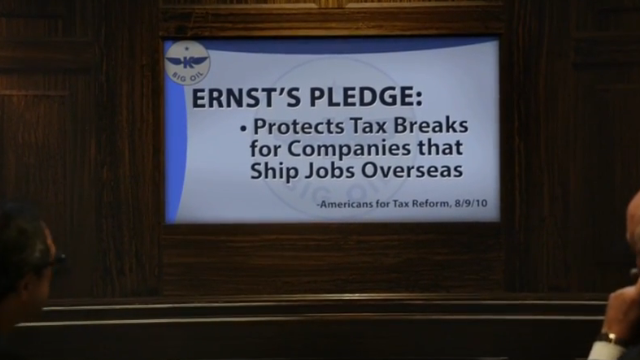 But its latest attack ad is all about taxes.

The group says the television commercial, which was released Wednesday, will air in three major media markets across Iowa. But the spot never once mentions climate change or the environment. Instead the ad focuses on the Americans for Tax Reform's "no new taxes" pledge Iowa GOP Senate nominee Joni Ernst signed.

When asked for comment why the $2.6 million ad buy doesn't focus on climate change or the environment, NextGen spokesman Bobby Whithorne told CNN, "We're highlighting the fact that Ernst is in the pocket of big oil and special interests – the same crowd that's fighting good paying renewable jobs and doesn't believe we need to take action on climate change."

The pledge not to raise taxes is according to NextGen protecting "tax breaks for companies shipping jobs overseas."

In the ad, Americans for Tax Reform's staffers are depicted as dubious figures plotting in a smoky room against the interests of "Iowa jobs" and to send jobs to Mexico and China. Ernst, the figures say, "is with us."

Although Norquist points to fact checks by Politifact and Factcheck.org to bolster his claim that the ad is "false," he provides no evidence it is indeed plagiarized. Political attack ads frequently recycle and repeat claims and talking points others have used if they consider them effective.

Calls to Americans for Tax Reform for further comment were not immediately returned.

Ernst, a state senator, is running this November against Democratic Rep. Bruce Braley. The winner will succeed longtime Democratic Sen. Tom Harkin, who's retiring at the end of the year.

The latest polls indicate the race is deadlocked.

Democrats have a 55-45 majority in the Senate (53 Democrats and two independents who caucus with the party). But in the midterms, the party is defending 21 of the 36 seats up for grabs, with half of those Democratic-held seats in red or purple states like Iowa.