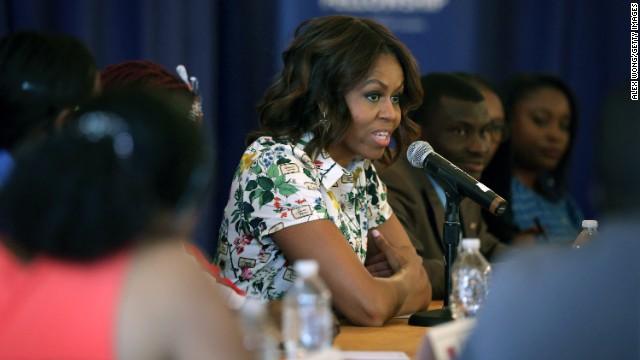 “I imagine that for some of you here today, getting your degree might have meant disobeying or disappointing your families,” she said, specifically addressing the girls in the room.

“Maybe while you’ve been acing your studies and thriving in your career, you have a grandmother who has been wringing her hands because you’re not yet married. But, my sisters, you all are here today because you have found a way to overcome these challenges, and you have blossomed into powerful, accomplished women. And we need you all to help others do the same.”

Mrs. Obama called on global action to lift all women from oppression, expressing that a nation cannot succeed without investing in its young girls and women first.

“The truth is, I don’t think it’s really productive to talk about issues, like girls’ education, unless we’re willing to have a much bigger, bolder conversation about how women are viewed and treated in the world today,” the first lady continued.

“We need to be having this conversation on every continent and in every country on this planet. And that’s what I want to do today with all of you, because so many of you are already leading the charge for progress in Africa.”

Mrs. Obama didn’t hold back, at times admonishing countries where violence against women is prevalent and acceptable, and acknowledging there’s more work to be done.

“While I have great respect for cultural differences, I think we can all agree that practices like genital cutting, forced child marriage, domestic violence are not legitimate cultural practices, they are serious human rights violations and have no place in any country on this Earth,’ she said.

Mrs. Obama said the United States has made great strides in women’s rights, but still has a way to go, citing issues such as unequal pay and under representation of females in Congress.

The first lady acknowledged that her own story and path to the White House was only possible through getting an education, and paid tribute to the late Nelson Mandela, the first African president of South African, who would have celebrated his 96th birthday this month.

“My parents and grandparents knew the sting of segregation and discrimination. Yet I attended some of the best universities in this country. I had career opportunities beyond my wildest dreams. And today, I live in the White House. As Madiba once said, ‘It always seems impossible until it is done,’”