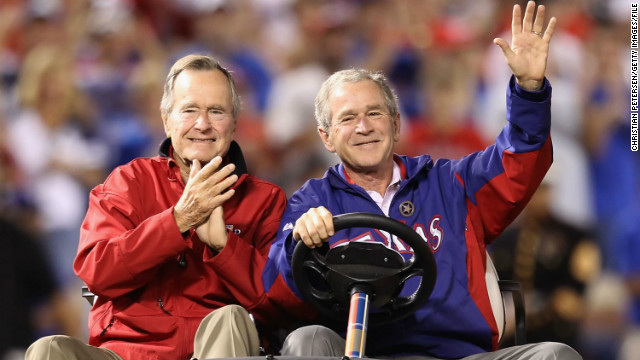 The biography about his father will hit book shelves on November 11, according to an announcement by Crown Publishers.

"George H. W. Bush is a great servant, statesman, and father," the younger Bush said in a statement released Wednesday night. "I loved writing the story of his life, and I hope others enjoy reading it."

While countless books have been written about American presidents, the publishers say that "never before has a President told the story of his father, another President, through his own eyes and in his own words."

Maya Mavjee, the president and publisher of Crown Publishing, said "as the only father and son to each have served as President of the United States since John and John Quincy Adams, George H. W. Bush and George W. Bush occupy a unique position in history," adding that the younger Bush has written a "heartfelt, intimate, and illuminating portrait of his father."

Crown Publishers says that there will be 1 million copies in the book's first printing, and that Random House Audio will simultaneously put out an audio edition. The currently untitled book is being released one week after November's midterm elections, which is when the next race for the White House unofficially begins.

The elder Bush, who turned 90 last month, was a fighter pilot during World War II. He served in Congress, as U.S. ambassador to the United Nations, and was a director of the CIA. He was Ronald Reagan's vice president for two terms and followed him into the Oval Office in 1988 but lost to Democratic challenger Bill Clinton in 1992.

“He is of course touched – make that very touched," said Jim McGrath, a spokesman for the 41st President.

This is George W. Bush's second book, following "Decision Points," a 2010 memoir that focused on the biggest decisions of his personal and political life. Crown says that book "is the bestselling Presidential memoir of all time, with more than three million units sold to-date in the U.S. alone across all formats."