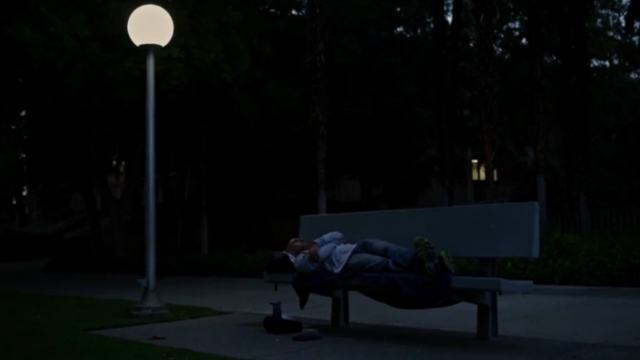 (CNN) - Down by double digits in the most recent polling, California's Republican gubernatorial challenger took his campaign to the streets.

Neel Kashkari announced Thursday that he recently spent a week living as a homeless person in Fresno, California, to highlight poverty in the Golden State. Kashkari's campaign released a 10-minute long video that chronicles the candidate's week long unsuccessful search for a job.

The video shows Kashkari riding to Fresno on a bus on July 21, with what they say was just $40 in his pocket.

"This has been one of the hardest weeks of my life. I came to Fresno expecting to be able to find a job, and take care of myself. But it's been a week and I've found nothing. I've run out of money and had to turn to the homeless shelter for food," said Kashkari, in the video, which shows him sleeping on public benches and being turned down as he searched for a job.

"While the politicians who run California pat themselves on the back and claim a 'California Comeback,' they willfully ignore millions of our neighbors who are living in poverty," Kashkari said in a statement. "California's most vulnerable citizens deserve leaders who will fight for them – and as Governor I intend to do just that."

Public opinion surveys indicate Democratic Gov. Jerry Brown is in the driver's seat as he campaigns this year for an unprecedented fourth term. Brown had a 20-point lead over Kashkari in a Field Poll conducted in June and a 19-point lead in a Public Policy Institute of California survey conducted this month. Brown also appears to have a huge campaign cash advantage, with more than $22 million in the bank.

Brown campaign strategist Dan Newman told CNN that he's "puzzled trying to reconcile the bizarre stunt with his cynical refusal to help struggling homeowners when he had the chance, as well as his opposition to the minimum wage and unemployment benefits."

Newman also said he's "wondering how authentic an experience this is when (Kashkari's) followed by a paid camera crew before returning to his $10 million beach house."

Why Kashkari's running for governor

The Golden State holds "open" or "jungle" primaries, in which all candidates compete in a single contest and the first and second place finishers, regardless of party affiliation, advance to the general election.