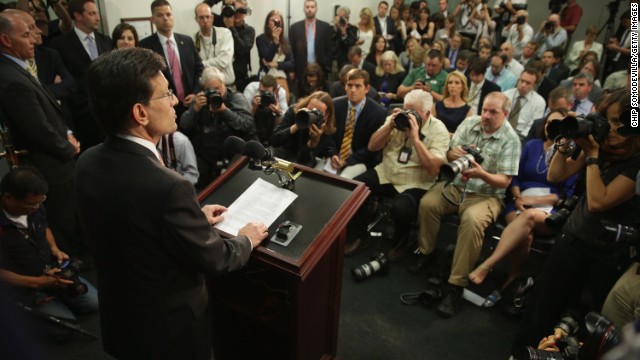 Cantor also said he asked Democratic Gov. Terry McAuliffe to hold a special election for his district on the same day as the regularly scheduled November 4 general election. By holding a special election that day for the district, the winner would take office immediately, rather than wait until the next Congress convenes in January.

"I want to make sure that the constituents in the 7th District will have a voice in what will be a very consequential lame-duck session," Cantor said in the exclusive interview with the newspaper.

A spokesman from McAuliffe's office told CNN that the governor's reviewing Cantor's request and will have a decision shortly.

Before his primary defeat, the seven-term congressman was considered to be the top candidate to succeed House Speaker John Boehner when Boehner eventually retires.

Cantor was upset in his June 10th primary election by Dave Brat, a little-known economics professor who enjoyed the backing of local tea party activists and other grassroots conservatives.

In the primary's closing days, aides close to Cantor said they expected the majority leader to win around 60% of the vote in his primary. He didn't come close, losing to Brat by around 10 percentage points.

Analysts say Cantor misread the pulse of conservatives in his Republican-dominated district, which is anchored in the Richmond area but stretches some 100 miles from the Tidewater to the outer reaches of the Washington exurbs.

"My sense from talking to people in the 7th Congressional District is that Cantor had lost touch with the base of the Republican Party there, and by the time he realized it and tried to make amends, it was too late," Virginia political analyst Quentin Kidd said.

"The real problem that the (tea party) base had with Cantor is that they got to where they didn't trust him," added Kidd, director of the Watson Center for Public Policy at Christopher Newport University. "The issue that broke the bank for him was immigration. They saw him say one thing in Washington then say something else to them, and it caused deep distrust in the district."

Cantor's campaign shelled out a couple of million dollars in television and radio ads to send its message that Cantor was "a strong conservative." It outspent Brat's by more than 10-1. To put it another way, Cantor spent well over $100 for each vote that he won. Brat spent around $5 per vote.

Brat is considered the favorite as he faces off in November against Democrat Jack Trammell, like Brat a professor at Randolph-Macon College. There's no word yet on whether Brat and Trammell will run in a special election.

What's next for Cantor

In the interview, Cantor did not reveal what he would do after stepping down.

"My wife and I are sort of going to make those kind of decisions, and I do think they are best made as private citizens," he told the Times-Dispatch. "But I'm looking forward to being a very active member in that democratic system and advocate for the cause that I believe in."

There's speculation that Cantor may have a lucrative job offer in the works.